Here is a transcript of new Rye Mayor Joe Sack's State of the City address from Wednesday: 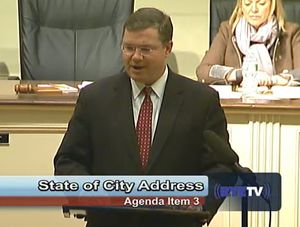 If this address was meant to have top billing tonight, it certainly got upstaged by the appointments of Councilman Mecca and Councilman Slack.  But that’s alright with me, because we’ll need the hard work of these new members of our team, long after the few words spoken here tonight have faded away.

Fifty years ago, in 1964, the building in which we are gathered tonight, our Rye City Hall, was first dedicated and opened for business.

But by the 1960’s, Rye’s working needs had grown larger than could be accommodated by the historic tavern in which George Washington once slept.

Saving the day was the vision of former Mayor John Motley Morehead, who generously donated the funds to begin construction on this site – where the Rye Playhouse movie theater and then a gas station once stood – of a new and modern City Hall.

There are two bronze plaques in the hallway outside Council Chambers commemorating Mayor Morehead’s gift, and noting the Council members who presided over the dedication in 1964, including future Mayors Ed Grainger and John Carey, who are still very active in Rye today.

So 2014 is a historic milestone year in Rye, and we will make plans to properly celebrate this building’s Golden Anniversary.

As we head into the New Year, there is no shortage of important issues on our plate.  These issues are not new.  They are the same issues that we’ve faced over the past few years.  But what we can change is the way that we approach these issues.  And in so doing, perhaps we may achieve some resolution to these issues, and find outcomes which are most beneficial to the people of Rye.

The police union arbitration decision was issued in October of last year.  There was much effort by one party or another to couch this decision in the context of “we won” and “they lost.”  This type of spin, whether real or imagined, completely misses the point.  That is, because both sides could not come to a negotiated settlement, and because our combined fates were left to be decided by an arbitrator over whom we had no control, both sides had already lost well before the arbitration decision even came out.

We need a fresh start where both parties – management and collective bargaining units alike – work together to cultivate mutual understanding of the respective economic pressures which we are all under, in order to arrive at mutual respect and trust.  Let’s try to get a deal done this year.

The future plans for Playland seem to be moving forward and accelerating.  The concept of re-inventing Playland for the 21st Century is certainly appealing.  But amongst some residents, there has been apprehension, frustration and even anger, fueled mainly by a belief that they’re not getting information.  Likewise, one can see how supporters of change have become disenchanted, concluding that no answer they give will ever be seen as good enough.

There is a distinct role for the City to play here.  We shouldn’t be unthinking cheerleaders.  Nor should we be cantankerous obstructionists.  We can and must facilitate the simple asking of questions, and the provision of helpful answers.  Ultimately, if the plans for Playland cannot withstand scrutiny, then there is a problem.  But if the plans for Playland can stand up to reasonable analysis, then fault should not be found.  Let’s defuse the situation with clear communication.

There are two sites in Rye which have been discussed for significant multi-family residential development:  The vacant lot near the corner of Theo Fremd and North Street, behind the gas station and abutting the train tracks, where there is a proposal for County-subsidized affordable housing units.  And 120 Old Post Road, the old Mobius Building, along the Playland Parkway access road, where there is a formative concept for a senior assisted living facility.

We cannot allow these projects to meander.  We need to be more assertive in defining the City’s interests in these projects, and in leading the residents of our community towards an informed consensus.  Let’s step it up this year.

At Rye Golf Club, we need to more aggressively pursue the employee theft insurance claim that we filed in the wake of the management scandal that we’ve unfortunately had to endure.  Let’s get some movement here.

This week, we had the first meeting of the Rye Golf Club RFP Review Committee.  We need to quickly and thoroughly analyze the responses we received, in order to decide whether to negotiate an agreement with one of the responders.  Things are starting to look up.  Let’s finally turn the corner on this.

We have a number of infrastructure projects, mainly emanating out of the 2012 bond issue referendum, which will finally get into full swing this year.  Let’s keep tabs on them, and also find time to pursue other important but long-neglected projects, like improvements and parking at the MTA-owned Railroad station plaza, and possible renovations at the court house facility.

Let’s not let up in working with the County regarding flood mitigation projects, including at the County Airport, and in reviewing other potential projects for additional upstream retention.

Earlier today, I was asked to sign a tax warrant for over $20 million, representing the money to be raised from our residents in 2014 City property taxes.  Therefore, let’s also not ever lose sight of the fact that the financial stability of our City is one of our top priorities.  Let’s identify long-term liabilities and expenditures so that we can reserve appropriately, and let’s identify ways to reduce the City's long term liabilities for pensions and healthcare.

And let’s make sure that we have a firm handle on all personnel matters as we embark on the transition to our new Council administration.

This Rye City Hall has served us well for a half century.  It may need some updating and refurbishing, but it has good bones.

The same might be said of the state of our City – we are built on a solid foundation, but we can also stand to make some improvements, and to keep up with the demands of changing times and new challenges.

And that is why the state of our City is strong and always will be.

Thank you and God Bless us all.