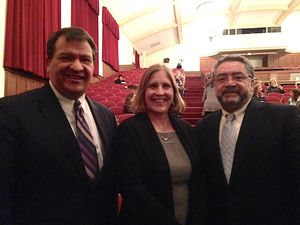 On February 13, over 100 Rye community members attended a panel advocating for change regarding the current educational reforms. Parents and taxpayers were informed about the major issues school districts are facing in light of the state’s required roll-out of the Common Core Learning Standards (CCLS), high-stakes testing, and new teacher accountability systems all in one year. The panel, held at Rye High School, featured presentations and remarks from Senator George Latimer, Assemblyman Steve Otis, Superintendent of Schools Dr. Frank Alvarez, Board of Education President Laura Slack, and teachers Jennifer Fall, Dayna Reist, and Suzanne Short.

The District has been involved in many advocacy efforts this year, urging the state to slow down the implementation of Common Core’s high-stakes testing, ensure the confidentiality of all student data, and alleviate constraints imposed by the new tax cap. The overwhelming message at this panel was the urgency for parents and community members to reach out to their elected and appointed officials and let their voices be heard with regard to these concerns. Three letters, to be signed and passed along to decision-makers, were made available at the event and can also be accessed via the District’s website, www.ryeschools.org, where contact information for the recipients is also listed.

Superintendent Frank Alvarez explained that while superintendents, principals and teachers around the state have shared apprehensions over the last several years about the Common Core curriculum and requirements, the reality is now beginning to set in. “We are not alone in our concerns,” he stated. “We are not certain that the education reforms that the state is imposing are necessary in districts like Rye, where students have traditionally outperformed their peer group and have historically been college- and career-ready.”

Ms. Short emphasized one problem with the APPR review process, which is that regardless of how good a teacher may be overall, the teacher must be labeled “ineffective,” and placed on a performance improvement program if the student-testing component of the evaluation falls short. Ms. Reist discussed the Common Core’s requirement for teachers to pre-test students, potentially souring the students’ enjoyment of subsequent learning processes and hindering their ability to learn. “It is time to stop testing students on material they have not been taught,” she stated.

The teachers all expressed that they are seeing the learning process become rushed in order to keep up with the schedule of material required to be taught. “There is less free time,” Ms. Fall said. “[Students] are having working snack time.” She did indicate that parental advocacy will make a difference. “We have a stake in the game because this is our job,” Ms. Fall stated. “The most powerful voices are parental voices.”

Board President Laura Slack described the finances of public schools in New York State; specifically the tax cap, state aid, pension costs, and other expenses. “Rye’s history of student success is threatened by a tax cap formula which does not account for enrollment growth, skyrocketing pension costs or any of the costs associated with the unfunded mandates of common core, testing and APPR,” she said. She explained that the tax cap is 2% or the rate of inflation. As Mrs. Slack stated, “This year the tax cap is the rate of inflation, and it is even more burdensome as it is only 1.46%. This one change will cost the Rye City School District $413,000.”

Two slides were presented illustrating enrollment growth and increases in pension costs. The District has seen an 18.6% enrollment increase, equivalent to 518 students, since 2004-05. Yet, over this same time period, the District had to cut 59 full-time positions because of the unfunded mandates imposed by the state and a tax cap calculation without exemptions for enrollment and skyrocketing pension costs. As far as pensions, Teachers Retirement System (TRS) and Employees’ Retirement System (ERS) costs have risen dramatically over the last five years since 2008. “Retirement costs are passed by law to the school districts, which have no choice under the tax cap but to make cuts to the budget in order to pay,” she explained. “The current exemption only exempts the amount of rate increase over two percentage points. This year the rate increase goes from 16.25% of salaries to 17.53% of salaries, none of which is exempt because it represents less than 2% points even thought it imposes an increase of 12% in costs.”

State aid has been withheld from Rye and all other school districts since 2010, in order to close the state deficit. Mrs. Slack explained that the state no longer has a budget deficit – in fact, it now has a surplus. “Rather than simply returning the school aid to the school districts, the Governor has a complex proposal purporting to return money to some taxpayers but so many contingencies it makes actual rebates to taxpayers highly unlikely," she stated. In the aftermath of the Newtown tragedy, Rye was among many school districts that increased security. Mrs. Slack expressed that it would have been wise for the state to exempt security costs from the tax cap in order to prevent districts from having to choose between security and hiring a teacher.

State Senator and Rye resident George Latimer said the quality of the School District is a primary reason for people moving to Rye. “The core of all of this comes down to a human reality,” he stated. “We care about our kids. More than just about anything.”

Senator Latimer explained that legislature needs to consider the fact that there are all different types of schools throughout the state. He noted that the budget process is initiated by the Governor, and that the formula by which state aid is distributed — the Gap Elimination Adjustment (GEA) — will be under heightened scrutiny during the budget process. Historically, the Rye City School District does not fare well under the formula in terms of the amount of aid it receives. “I expect that out of the budget we adopt there will be an additional reduction in the negative impact of the GEA,” Senator Latimer stated.

Senator Latimer went on to discuss the Common Core, and that while raising standards can be a good idea, the problem with the implementation is that the State Education Department did not include the stakeholders (parents, teachers, and administrators) in the process. “What I do know is that no change is ever done over the objections of all those it affects,” Senator Latimer said. “When you see the error, you stop and go the other way.”

Assemblyman Steve Otis emphasized the importance of getting the Board of Regents to listen to the concerns people have. From the teachers’ descriptions of the problems with the Common Core curriculum so far, Assemblyman Otis said it seemed the Common Core was similar to what he experienced in law school. “You have to move, move, move,” he stated. “You can’t reflect on what you are learning. What I’m hearing in this description is, we are going to turn all of education into an athletic event.”

Assemblyman Otis also shared his concerns about the data collection by inBloom. The panel of teachers described the data as following the students “from cradle to grave.”
Assemblyman Otis said that permanent record could be used to limit one’s job opportunities. “It’s a little too much,” he said.

“Our priority as a school district is to preserve our excellent educational programs, supported by appropriate staffing and extra-curricular opportunities,” Dr. Alvarez stated in a letter to parents. “We ask you to support our advocacy efforts.” To obtain the letters and contact information for elected officials, please visit www.ryeschools.org and click on the “Advocacy for Mandate Relief” link.