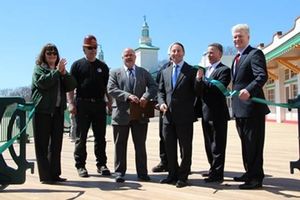 On Thursday County Executive Rob Astorino celebrated the opening of the Playland boardwalk, highlighted by a newly rebuilt section that extends all the way to the Rye Town Park. The boardwalk suffered major damage during Hurricane Sandy and a large section of the boardwalk from the Pier Restaurant to the miniature golf course had to be completely rebuilt. That section (Phase I) was completed last May ahead of schedule and under budget. The section from the miniature golf course to the Rye Town Park (Phase II) suffered damage and was repaired last year but the decision was made to rebuild it this year with the same long lasting Brazilian hardwood used to rebuild the Phase I section.

The Brazilian hardwood known as Ipe is more fire resistant than standard wood; it’s more durable and can last more than 30 years compared to 15-20 years for standard wood; and it doesn’t splinter.  The cost for the 37,300 square feet of replacement decking is approximately $2 million. FEMA will reimburse the county a portion of the rebuild costs.

In the news released from the county there was no mention if the Brazilian rainforest wood is FSC certified or carries another guarantee of being sustainably harvested. MyRye.com has asked the county for this information and also inquired if it considered using recyled plastic lumber, a popular and sustainable decking type.

Titan Construction Group, based in White Plains, was hired to complete the project.

Playland Opening Day is Saturday, May 10.