Rye High School Drops in Ranking of “Most Challenging Schools”

Rye High School has earned recognition on the Washington Post’s list of Most Challenging High Schools, ranking number 213 out of over 2,025 schools nationwide. But that ranking dropped 34 spots from 2013. In fact, the school's ranking has dropped every year since 2007 when it was ranked numer 74 on the list. 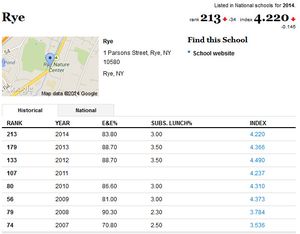 “The recently published rankings from the Washington Post reaffirm the pride and enthusiasm that is found in the Rye City School District,” stated Rye High School Principal Patricia Taylor. “I am proud of the students and faculty for setting and reaching high goals for themselves. There is an underlying belief that all students can achieve success and that support and focus leads to our success. Congratulations belong to everyone working toward student success, K-12.”