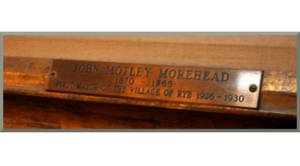 Almost 50 years ago, on December 5, 1964, Rye’s “new” City Hall was dedicated in a special ceremony in the Council Chambers.

Amazingly, the construction of this public building was the result of the extreme private generosity of one man – former Mayor John Motley Morehead.

Mayor Morehead donated the entire funds needed to design and construct City Hall, which has served unfailingly as the home of our City government over the past half century to the present day.

On December 10, 2014, Rye will celebrate the re-dedication of City Hall in another special ceremony.

To mark this occasion, we are providing an opportunity for Rye residents to emulate the spirit of generosity personified in Mayor Morehead.

While City Hall certainly has good bones, it could use some re-furbishing. Many aspects of the building have gone without updating since the day it opened, including in the Council Chambers itself, where the chairs and floor are “original.”

Donations of $250 and above are being accepted to fund these upgrades. The first 120 benefactors will have their names affixed to the 120 chairs in the Council Chambers. Donors of $1,000 or more will additionally have their names memorialized on a commemorative plaque to be displayed in City Hall.

There is no way that we can ever match the size of the gift bestowed on Rye by Mayor Morehead. But we can certainly do our part to continue his legacy of giving in this small but meaningful way.

And what better way to celebrate the 50th Anniversary of the opening of City Hall than by giving the main public meeting room of the building a much needed facelift!

Thank you for considering participation in this way, and I look forward to seeing you at the party on December 10th!

You can donate here.