Not those urban coyotes from the summer of 2010…

These guys also play in the park, but they are grown men with musical instruments. Thunderstorms kept them inside last time, but they will be set free into the park (second try) on August 26: 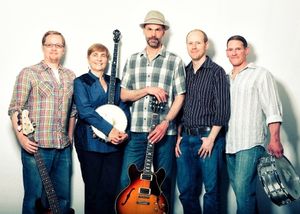 “The Urban Coyotes” will be performing a concert on August 26 at Rye Town Park as part of the park’s Twilight Tuesdays concert series. This concert has been rescheduled due to a severe storm on the original date.

Hailing from from Rye and NYC, the Urban Coyotes are a five-piece rock band playing a cool mix of "Americana"-inspired cover tunes, drawing on soulful rhythms from New Orleans to Memphis to Austin.

Blending gritty, electric blues with mandolin, banjo and other acoustic instruments, the Urban Coyotes deliver their own interpretations of new and emerging classics from REM and Tom Petty to The Decemberists and Ray LaMontagne. People should be prepared to groove to some of the greatest music of the past few decades.

The concert will be held on Tuesday, August 26th at the park’s south pavilion, located by the beach near the Dearborn Avenue entrance to the park. The concert will start at 7:30 p.m. and end at 9:00 p.m. Admission is free, and parking at Rye Town Park will be $5 – $4 for permit holders – after 4:00 p.m. Nearby residents are encouraged to walk.

Space in the pavilion will be set aside for dancing.

All concerts will be held rain or shine, except in case of thunderstorms. Picnicking is welcome. Some seating will be available, but people are encouraged to bring blankets or beach chairs. Dining and takeout is available at the nearby Seaside Johnnie’s Restaurant.

This is the last of seven free concerts that will be held on Tuesdays in July and August.