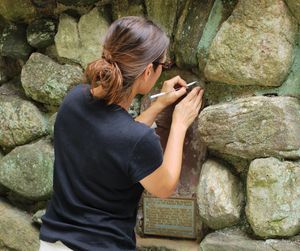 (PHOTO: Amanda Trienens, conservator has been cleaning mile marker 24, removing old deposits of epoxy that have trapped the moisture and bacteria that contribute to failure of the stone.)

We have written about American history and mile marker 24 before. Now this update from the Jay Heritage Center that they are busy restoring this important artifact:

If you've walked, cycled or driven by the Jay Estate lately, you may have noticed that conservation of Mile Marker 24 on the historic Boston Post Road has begun. The brown sandstone monument can be found set into the park's perimeter stone wall with the Jay Mansion directly behind it. It is one of 3 milestones in Rye placed 200+ years ago along the oldest highway in the United States. Today it is the only one whose original numerical inscription and bronze re-dedication plaque remain visible to the public. 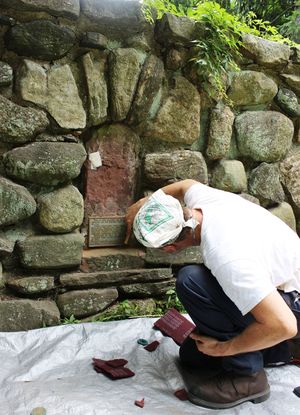 Remarkably, this popsicle-shaped stone has survived centuries of cultural, political and climate change. Its location approximates the 24 mile trek between John Jay's childhood home and his own "Safe Route to School" to King's College (today's Columbia University which originally adjoined Trinity Church down on Broadway). This waypost has seen Rye's main thoroughfare undergo various re-incarnations. "Ol' tyme" monikers like "The King's Highway" or "The West Chester Turnpike" gave way to today's simplified "Route 1."

To safeguard this loyal sentinel and all the stories it can help tell, the Jay Heritage Center selected Amanda Trienens, founder of Cultural Heritage Conservation to stabilize it. Amanda has helped assess, research and protect early American treasures including the Alexander Hamilton Monument and the Montgomery Monument both located in downtown New York City at Trinity Church. She has helped preserve other notable NY landmarks including Bethesda Terrace, in Central Park; the TWA Terminal and the United Nations. Working alongside her is Matthew C. Reiley of Excelsior Art Services. As Associate Director of Conservation for the Central Park Conservancy, Matthew is responsible for the care of Central Park’s built environment, which includes a collection of 50+ bronze and stone monuments, historic architecture, fountains, mosaics and other features.

Rye's milestone 24 is being conserved in place so that everyone can watch the process from lichen removal to grout injection to bronze polishing.