A group has launched a Rye fund for the city schools to cover what is expected to be an increasing demand for private funding in the face of continuing budget restrictions due to the 2% tax cap from New York State.

The initial founding donors, contibuting an initial $350K are: 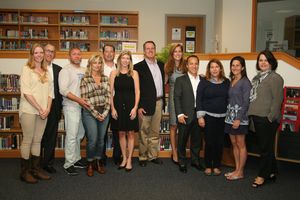 (PHOTO: Some of the donors on the evening of the annoucement: Peter and Gwen Rukeyser, Glenn and Gina Giordano, Donald and Anne Pollard, John and Kimberly Abate, Michael and Maria Guarnieri, Sandy Samberg, Karen Belanger. Photo credit Kathleen Durkee.)

Detail on the fund follows:

Fund Begins with Donations and Pledges of over $350,000

RYE (NY) September 22, 2014―Mary Payton Emery tonight announced the creation of the Rye Fund for Education, Inc. at a press conference held at the Rye High School and Middle School Media Center. Emery is the President and a Trustee of the newly- launched Fund. The mission of the Fund is to raise tax-free donations for the Rye City School District to be used for larger and/or extraordinary initiatives important to the entire community. Though just in its infancy, the Fund launches with donations and pledges totaling over $350,000.

The idea for the Fund came about in 2012 in response to the 2% tax cap, the multi-year tax freeze budget property tax rebate, unfunded government mandates and other economic conditions that when combined with Rye’s ever-increasing enrollment figures, presented fiscal challenges threatening to Rye’s continuing public school excellence. The Fund founders envision an organization that will raise funds and make grants across the school district as a whole and for larger scale items. The Fund filed for 501(c)(3) tax-exempt status, which was granted on June 3, 2014, retroactive to March 1, 2013, the date of the Fund’s incorporation.

The Rye Fund for Education will provide support for the “extras” needed to ensure that cutting-edge resources are available to teachers and students. The Fund intends to focus on three main areas, which it is calling “Triple AAA.” They are Academics, Arts and Athletics.

The Fund seeks to galvanize community support for Rye’s public schools and to maintain Rye’s property values. It welcomes the support of all parents with children in the district as well as preschool parents, alumni, corporations and all Rye residents interested in promoting public education. As is the case with other school foundations, donors may contribute to a general fund to be applied to district needs through a cooperative effort between the Fund and the district and there will be opportunities for more targeted giving.

Current members of the Board of the Rye Fund for Education are Mary Payton Emery, Kim Abate, Richard Slack, and Rye Superintendent Dr. Frank Alvarez, who is a non- voting member. In addition, Lora Katsikas serves as Treasurer of the Fund and Laura Slack is the Rye School Board of Education Liaison to the Fund.

The Fund’s inaugural fundraiser committee is called “Got a Brick?” and is chaired by Susan Ciardiello. Donors are invited to dedicate a brick paver, planter or bench in the new Garnets’ Courtyard, adjacent to the new High School Science Wing. Dedications can be made in several ways, including teacher recognitions, family or individual names, or alumni or corporate dedications. Donations from the “Got a Brick” fundraiser will go into the general fund of the Foundation.

Mary Payton Emery said, “We are very excited about the number and extent of the donor commitments we have received at this very early stage. We feel strongly that Rye should have its own community-led education foundation to help ensure continued educational excellence in our public schools. We recognize that the Rye community is brimming with exceptional talent and expertise and we plan to draw upon that as we expand our leadership.”

Frank Alvarez, Superintendent of Schools, said, “The current fiscal environment is making it hard for the Rye City School District to do the things that great districts do. Many of our peer districts in Westchester, including Scarsdale, Bronxville, Chappaqua and Edgemont, already have foundations. I believe this is the right time and the right team to do great things for all of our public schools.”

About the Rye Fund for Education

The Rye Fund for Education is a 501(c)(3) non-profit corporation operating as a non- partisan public charity in Rye, New York. The Fund operates in cooperation with, but independently from, the Rye City School District. Its purpose is to support Rye’s public schools and to promote educational excellence in our community. The Fund seeks to raise money through donations from community members, alumni, corporations and others to fund grants to help maintain the excellence of Rye City Schools. For more information, visit www.ryefundforeducation.org.