The Rye Board of Ed showcased the new science wing at Rye High School this Saturday. Here are the details of the new addition: 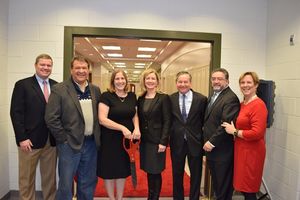 As part of a ribbon-cutting ceremony, Superintendent Dr. Frank Alvarez and Board of Education President Laura Slack thanked the community for their support and investment in the future of Rye’s public schools and noted that the new facilities will enable students to continue to excel in the critical areas of science, technology, engineering and mathematics, or STEM, disciplines.

“We appreciate the continued support from the people of Rye,” said Superintendent Dr. Frank Alvarez. “This investment, while significant, is a fiscally-astute way to accommodate the needs of our students for cutting-edge technology so that they can meet, and exceed, the high academic standards we have in place in the Rye City School District.” 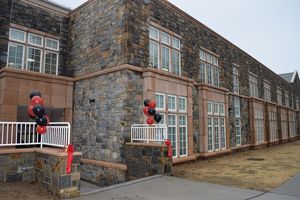 Construction of the Science Wing was completed on time and under original budget estimates. While the deadline for completion was August 20, the District granted the construction company minor extensions to complete some interior and exterior work. Safeguards were put in place by the District to ensure no additional costs were accrued. Students were in the building taking classes two days after the beginning of the 2014-15 school year.

“Construction of the new science wing has been a tremendous undertaking and we are very pleased that it was delivered on time and under budget,” said Slack. “It could not have been done without the support of the Rye community.” 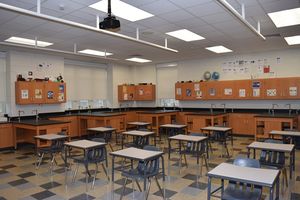 High School Principal Patricia Taylor said, “I want to thank the Rye community, parents, teachers and staff for their support during the construction of this magnificent building. It has already made such a difference in the lives of our students and will continue to do so for years to come.”

Rye High School students led members of the public on tours of the $16.35 million building, and Science teachers demonstrated the features of their individual classrooms while a string quartet from the High School band provided musical accompaniment for the tours. A short reception followed.

The new two-story, 17,000-square-foot addition includes 12 science lab/classrooms, including chemistry, biology, physics, engineering and earth science labs, and numerous other features, including wireless Internet, Smart Boards and an improved HVAC system that filters classroom air. The wing is architecturally consistent with the existing historic 231,000 square foot building at the High School and Middle School campus. The addition of the Science Wing meant that three old science rooms in the High School could be converted into five badly-needed new classrooms and a hallway leading to the addition. The construction project also included the removal of four antiquated modular classrooms and the addition of a parking lot adjacent to the gym, both of which should serve to ease parking congestion in the area.

In 2012, Rye voters approved a $16.35 million bond to finance construction of the new science wing to replace antiquated science labs dating back to the original building and to accommodate Rye’s growing student population and ensure that the District maintains its high academic standards in the field of science. Student enrollment at the High School has grown to 1,011 students, a 36 percent increase since 2006, and the District anticipates that trend will continue.
###