(PHOTO: Rye Mayor Joe Sack presides over a packed city council chambers during the 50th anniversary celebration of city hall on Wednesday night. The celebration brought out the heart of Rye including many current and former public servants of our city.)

Rye City Hall needs a bit of a refresher after 50 years of wear and tear. 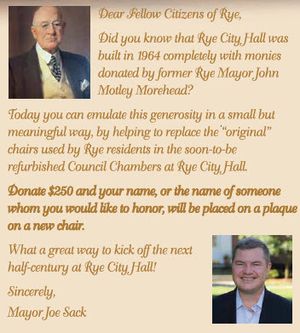 Just last night, Rye City formally celebrated the 50th anniversary of Rye City Hall and its donation in 1964 by Rye Mayor John Motley Morehead. He foot the bill for the entire thing (over $500K back in 1964).

Now current Rye City Mayor Joe Sack is letting you get in on the action with naming rights for as little as $250. You are about to spend more than that on the new Xbox for your kids… Of course, the $250 gets your name on one of 120 chairs in the city hall chambers, not on the front of the building.

To date, $20,000 has been raised, Sack told MyRye.com (that means about 80 of the 120 chairs have been claimed – so if you want your legacy to make someone's bum comfortable while attending a council meeting, get moving).

But hey, if you have the cash to re-do the entire joint (and some in Rye City have this ability), we are pretty sure Sack would take your phone call.