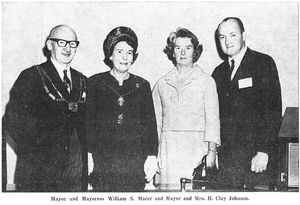 (PHOTO: At the 1964 dedication, the Mayor and Mayoress of Rye, England William S. Macer and then Rye Mayor and Mrs. H. Clay Johnson.)

This Wednesday, Rye City will gather to recognize the 50th anniversary of Rye City Hall. The building was a gift to the city from former Mayor John Motley Morehead. One of the finest artifacts of Rye City history this writer has seen, the December 5, 1964 Dedication Program for the then new Rye City Hall is a 15 page gem. 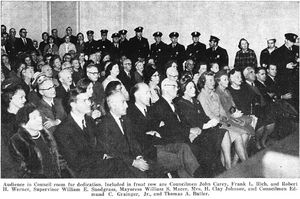 (PHOTO: The dedication ceremony in 1964. Some residents might recognize former Mayor John Carey in the front row, second from left.)

Anyone interested in the people and character of Rye, its place in American history, the life of John Motley Morehead or our city hall and how it came to be should take a moment and read the program. Just a few of the highlights: 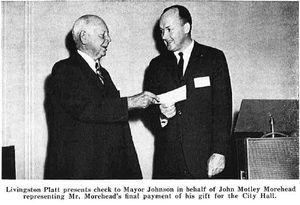 (PHOTO: On behalf of John Motley Morehead who was ill that day, Livingston Platt presents then Rye Mayor Johnson with the "final installment" of Morehead's $500,000 gift to construct Rye City Hall.)

The 1964 ceremony does not disappoint. Anyone who realizes how fortunate we all are to live here will enjoy this piece of history. Many thanks for current Rye Mayor Joe Sack for calling attention to this artifact. Sack told MyRye.com "This 1964 program was given to me by the daughters of Nora Mitchell, who was the longtime secretary to the City manager and who passed away in her 90’s last year.  When I read it, it was the inspiration for me conceiving of the re-dedication ceremony for Wednesday night."