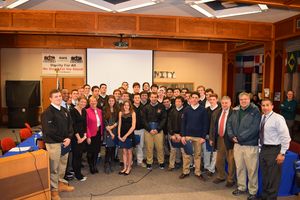 In 2012 we introduced our student recognition program, the Rye Recognition of Excellence Awards. Tonight I am proud to congratulate 48 students we are commending with this honor.

Tonight’s award recipients are Rye High School – and one Middle School – student who earned outstanding athletic accomplishments in the Fall of this school year.

Before we honor these individuals, I wanted to announce that all of our varsity fall teams have earned the distinction of Scholar/Athlete team, awarded by the New York State Public High School Athletic Association, Inc.

To win this honor, each team must earn a grade point average of 90 or higher.  In the case of Rye High School, every fall interscholastic team qualified. 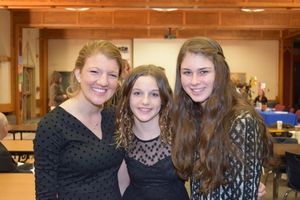 The Girls Dive Team competed at the State Championships held in Ithaca on November 21and achieved excellent results under the coaching of Melanie Dilascio and Shannon Bolger.   Tonight we are honoring Katie Laverty (Grade 7) and Madeline Kenny (Grade 11) who participated in the NYS meet, which consisted of a total of 58 divers.

Madeline (Maddy) finished the meet in 29th place.  She was 2 points shy of advancing to the semi-finals, which shows how competitive the field was.

Katie was the youngest diver in the entire competition.  Katie finished the meet in 12th place after flying through all three rounds of the meet.

Congratulations to these two divers and their coaches. 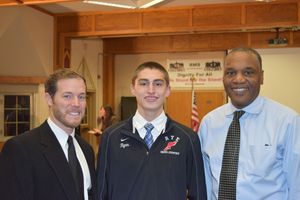 Jack Ryan finished the season having been awarded All Section and First Team All-Westchester County.  Jack participated in the NY State Class B Championship Meet held @ SUNY-Canton on Saturday, November 8.

Congratulations to Jack and his coaches Joe Brown and Blair Moynahan.

Finally, we are honoring our 2014 RHS Garnets Varsity Football team, who are undefeated, Class A League and Section Champions.  The team made it to the NYS quarter final game.   I’d also like to note that two members of the team, Andrew Livingston and Tim McGraw, have each been honored with a Con Ed Athlete of the Week designation; Andrew in September and Tim in November.

To our 48 Rye Recognition of Excellence Award recipients: Your hard work and the efforts you have put forward in your endeavors continue to pay off. You serve as excellent role models for our younger students, and you make us all proud. I hope everyone will join me in applauding our honorees as I call them up to the podium to receive certificates of acknowledgment.

Congratulations to everyone on a fantastic Fall Season. And now will you please join us on the side of the room for a few photographs.