Home People Ann Mara, a Giant in Rye and in Football, is Dead
People

Ann Mara, a Giant in Rye and in Football, is Dead 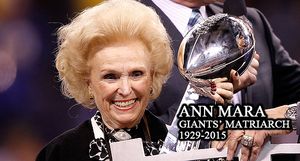 Ann Mara, a Rye resident and owner and matriarch of the New York Giants, died early Sunday morning. The Maras have long been part of Rye and of Resurrection Church.

From the Giants' web site:

EAST RUTHERFORD, N.J. – Ann Mara, who was often called “The First Lady of Football" and was one of the most influential figures in Giants history, the matriarch of the franchise’s founding family and a woman beloved throughout the National Football League and the New York sports community, passed away early today. She was 85.

“I am sad to say that our mother has passed away,” said John Mara, Ann’s son and the Giants’ president and chief executive officer. “She has been the leader of our family in every way, and we will miss her dearly.

“She slipped in front of her home (in Rye, N.Y.) during the ice storm two weeks ago (January 18). She had been in the hospital since the following day, initially due to a head injury she suffered in her fall. After a few days, we were hopeful for her recovery, although we knew it would be a long road back. Unfortunately, there were complications.

“She loved her family, and all of us were able to spend time with her in these final days. All 11 of her children and our spouses and numerous grandchildren were with her when she passed away.”

Ann Mara and her children owned 50 percent of the Giants since the death of her husband, Wellington Mara, at age 89 in 2005. Wellington Mara, a member of the Pro Football Hall of Fame, is the most significant individual in the Giants’ 90-year history and one of the most prominent men in the annals of the NFL…

They [Ann and her husband Wellington] were married in 1954, and their family eventually grew to four sons and seven daughters, 43 grandchildren (including renowned actresses Rooney Mara and Kate Mara) and 16 great-grandchildren."

[Publishers note: Lisa and JP, our thoughts are with you and your family.]