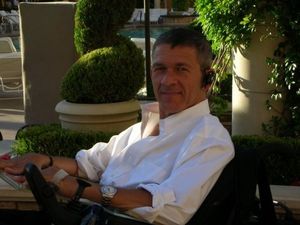 Rye's Luigi Garotto may be responsible for the closure of a famous New York City punk bar. That's because Garotto, who is disabled, sued the establishment for not being ADA compliant. Back in 2010 Garotto went after Starbucks in Greenwich for not being handicap accessible.

"Manitoba’s has been in its home on Avenue B between E. Sixth and Seventh Sts. since 1999, and is one of New York’s few remaining punk bars.

It was recently widely reported — both in the neighborhood and beyond — that Manitoba’s was at risk of closing. Many assumed the issue was the usual one about East Village bars — noise complaints. However, this case had nothing to do with decibel levels and perturbed neighbors.

Last year, a wheelchair-bound man from Rye, N.Y., claiming he was unable to enter Manitoba’s, sued the bar under the Americans with Disabilities Act. According to Bedford and Bowery, the man, Luigi Garotto, has reportedly filed at least 12 different lawsuits against New York merchants for A.D.A. violations.

The plaintiff sought $500 in damages and payment of his legal fees. The case was settled in December.

In order to pay for the bar’s legal fees and also to help keep the place alive, Manitoba and his wife, Zoe Hansen, started an Indiegogo campaign. The effort, which kicked off Jan. 19, had an original goal of $25,000…

The Manitoba’s team was able to meet its original fundraising goal by the Feb. 18 campaign end date. But, according to Manitoba, there is still a little ways to go.

“I have to pay $20,000 to the quote unquote ‘lawyer’ and need to pay a company to come in and make sure all their complaints are up to A.D.A. code,” he explained. “I have to order 100 T-shirts, 150 photographs, a bunch of poster tubes, boxes and packaging for bobblehead dolls. I have to hire enough people to buy all the proper packaging, postage and for the labor of sending out hundreds of items one at a time. Indiegogo takes a percentage and PayPal takes a percentage."

Facebook
Twitter
Email
Previous articleRye Co-Op Manager Steps in on Financing
Next articleRye Man Dead, Hypothermia May Be Cause