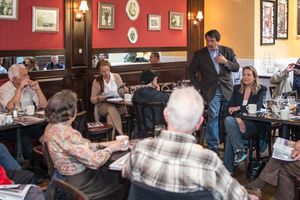 Playland, education policy and state ethics scandals led the list of issues raised and discussed at last Saturday's (April 25) session of Coffee and Conversation, with county and state legislators at Ruby's Oyster Bar and Bistro in Rye. The trio, all Rye residents, included County Legislator Catherine Parker, State Assemblyman Steve Otis and State Senator George Latimer, met over coffee from 9:30 am until 11:30 am, in this continuing series that began back in the late 1990s when Latimer was County Legislator. In the intervening years, Latimer's successor, Judy Myers and her successor, Catherine Parker, have been present to discuss County issues; now at the state level, Otis and Latimer covered the state issues, many of which were part of the recently adopted NYS Budget for 2015-16. City Councilwoman Laura Brett was also present at the gathering, and commented on the City of Rye aspects of the issues raised. 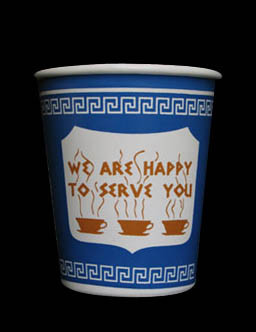 As expected, the announcement by County Executive Rob Astorino of a new management contract for Playland generated the greatest interest; while an issue affecting the County as a whole, Rye residents – as the host community of Playland – always express a higher interest in the future of the park. Parker outlined in some detail the proposal presented to the Board of Legislators, and laid out the process by which the Board will review the plan, along with opportunities for public comment. Residents including Bill Lawyer, Heather Patterson, Irwin Lefkowitz and Dierdre Curran inquired about elements of the plan, and in varying degrees, expressed concerns and skepticism over the probable outcome of the management change. Parker expressed her concerns as well, noting that the scrutiny of the proposal has just begun, and citizen input was welcomed by the Board. 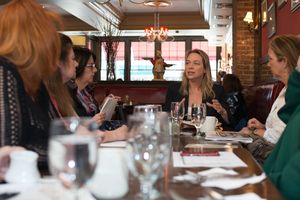 The high profile state issues of education and ethics led discussions with Latimer and Otis. Otis reviewed the complicated combination of issues including high-stakes testing of children, teacher evaluations, school funding, role of the Board of Regents, and other related matters. He expressed the frustration held by legislators that much of the education policy fell beyond the control of the Assembly and Senate. Latimer, ranking member of the Senate Education Committee has spoken out forcefully on his fundamental disagreement with policies which track back to Washington DC adoption of No Child Left Behind and Race to the Top. Latimer also reviewed the State Budget provisions on ethics changes designed to reduce the scandals that plague Albany, with provisions that tighten use of campaign funds, scrutiny of travel reimbursements, and pension forfeiture as a punishment for job-related felonies.

Otis mentioned a major budgetary success: creation of a $200 million fund to assist in sewer infrastructure repairs that will help benefit Sound Shore taxpayers in the necessary upgrades to clean up the LI Sound.

The three legislators met later that day for a similar session in Mamaroneck at The Nautilus Diner; Latimer and Otis also represent Port Chester, and are planning a session there at the Seniors Center on Grace Church Street on Saturday, May 9th. Future dates in Rye are expected in the summer and fall, to be determined.