In a letter to parents on Earth Day, Rye School Sup Alvarez says the Rye school system will become the "Soup Nazis" of education, eliminating teachers and programs, unless the school budget passes May 19th with the 60% cap override. 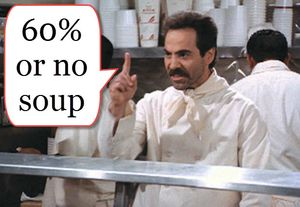 If the yes vote fails, here is a list of teachers and programs that will be nuked:

Here is the full letter:

At last night’s Board of Education meeting, the Board formally adopted the proposed

2015‐2016 budget that will come before voters on May 19th. This budget represents a 4.4% budget‐to‐budget increase over last year, and requires voters to “override” the state‐mandated tax cap of 1.62%. Under state law, it will require a supermajority – 60% of voters who come to the polls – to say “yes” in order for it to pass. The budget increase is all about maintaining the school system that we currently have in Rye in the face of decreasing state aid, ballooning pension costs and surging student enrollment.

Should this budget pass, we will be able to keep all of our programs and have some funding to allow for increased enrollment. My budget provides for approximately 3 new high school teachers to help keep our class sizes reasonable, new guidance staff to assist with the rising number of college applications given the growth in enrollment, and funding for a full‐day Kindergarten program. It restores the Middle School modified sports program and provides badly‐needed funding for security and technology.

For several years, the District has been using its reserves to help fund the operating budget and keep tax increases low. We can no longer continue to depend on reserves without jeopardizing our Aaa Moody’s rating. We had hoped that state aid would increase, or that state‐mandated pension costs would go down, to the point where an override would not be necessary. Unfortunately, that has not been the case. We now find ourselves in a position where we must seek to raise the tax levy to meet the operating needs of the District.

If this budget, which I have recommended and the Board has adopted, does not pass, it will be necessary to enact cuts to the educational program. The community would then be presented with a tax cap‐complaint budget, which will cut $3 million from the current program. As a result, 8 elementary and 2 middle school teachers would be eliminated and class sizes would necessarily increase. Foreign Language in the Elementary Schools (FLES) and the Writing Mentor Program would be cut. Latin, Mandarin, and French would begin to be phased out; and American Sign Language would be cut completely. Full‐day Kindergarten would not be possible; on the contrary, it would be necessary to cut all elementary school aides except for lunch and recess. All Middle School modified and club sports would be eliminated. The Board and I are in agreement that these cuts are definitively not in the educational best interest of Rye.

Overriding the tax cap this year does not mean we will be doing the same thing next year. In fact, the projections for 2016‐2017 show us to be able to put forth to the community a tax‐cap compliant budget in 2016‐2017.

Please be sure to vote on May 19th – and encourage other parents to do the same. We as a community have an important choice before us about what we want our school district to look like in the year ahead.