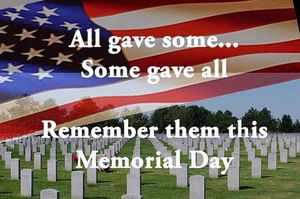 Rye will roll out its red carpet for a second year along Purchase Street for our Veterans on Monday, May 25th, Memorial Day, with a series of morning activities on that Monday holiday. After a multi-decade hiatus, the American Legion Post 128 and Auxiliary revived the Annual Parade in 2014, and is sponsoring the 2015 Parade; the parade starts from Station Plaza and proceeds along Purchase Street to the Village Green for the traditional Memorial Day Services, and the awarding of the Legion's Annual Americanism Award, among other recognitions. 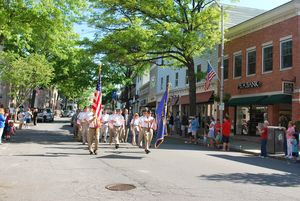 Rye begins its Memorial Day recognition with the Rye Fire Department's annual Memorial Day services at the Fire monument in the circle at Milton Road and Grace Church Street. Department members will march from the Locust Avenue Firehouse to the Monument, which honors those firefighters who served their nation, for a brief ceremony at 8 a.m. Visitors are invited to view the service at any point around the circle.

Marching organizations, bands, vintage cars, and veterans themselves will line up in Station Plaza at 8:30 a.m. for the parade to the Village Green. The parade is open to any groups wishing to march in honor of Rye veterans. All residents are invited to line the downtown streets to greet marchers, when they step off at 9:30 a.m. Some of the marching organizations participating include: Rye Historical Society, Rye YMCA, Girl Scouts, Boy Scouts, the Jay Heritage Center, Rye Lions Club, Larchmont Historical Society, Rye Girls Sports, RHS Drum Corps, a Brass Ensemble, along with the Rye Police and Rye Fire Departments.

Reflecting Rye's historical roots, there will be a number of horse-drawn participants featuring the iconic Wells Fargo Stagecoach, made possible by Wells Fargo Bank. The Larchmont Historical Society will march with their 1928 antique fire truck; the Jay Heritage Center will enter a horse-drawn hay wagon; the Rye Historical Society will provide horses and riders. Harrison Paint and Supply will provide their calliope wagon, adding to the old-time flavor of the festivities. A contingent of antique cars will travel the parade route as well.

At 10:30 a.m., American Legion Post 128 Commander Tom Saunders will begin the formal ceremony on the Green, which will include Guest speaker U.S. Congressman Eliot Engel and the awarding of the annual Americanism Award to Bob Steel, Social Studies teacher at Rye H.S., who pioneered bringing combat veterans into the classroom to tell of their experiences.

The ceremony features the traditional reading of the Gettysburg Address, awards to top school scholars who competed in an patriotic essay contest, and recognition of our honored war dead with the reading of the names of those who fought and perished in the wars of the 20th Century.

"We're excited that we've brought back to life a wonderful way to remember Rye's brave men and women who served and sacrificed for us" said Legion Auxiliary President Robin Phelps Latimer, the initiator and organizer of the parade. "Rye is fortunate to have so many community-minded residents who will participate in this event".

Elected officials, including Mayor Joe Sack and Rye City Council members, and County Legislator Catherine Parker, are all expected to be in attendance, as well as representatives from the Rye School Board.

Residents are encouraged to spend a few brief hours in downtown Rye to acknowledge, in appreciation, the veterans among us who have served their nation. For more information on festivities, contact Robin Phelps Latimer at 967-1819