IT’S A YES ON THE SCHOOL BUDGET (Official Statement Added)

(PHOTO: After the 9pm poll closing, interested parties were "locked" in the Rye Middle School gym to await the results.)

(Scroll down for the BOE candidate results) 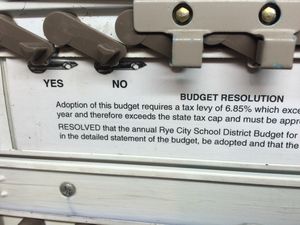 All three Board of Education candidates obviously won (for the three spots):

There were four write-in votes: two for Bob Zahm, one for Ed Fox and one for Josh Nathan. 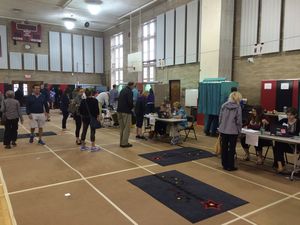 The official release from the school on the results follows:

FOR IMMEDIATE RELEASE ― RYE (NY) MAY 19, 2015 ― In a record turnout, Rye City voters today overwhelmingly approved the Proposed 2015-16 School Budget.  The following are the unofficial results for Rye City School District for the May 19, 2015 election. These results are unofficial until certified on June 2, 2015.

Laura Slack, President of the Board of Education said, “On behalf of the Board of Education and the Rye City School District, I’d like to thank the record number of community members who came out to vote today and delivered a clear message of support for our public schools;  the administrators and my fellow board members for the tremendous amount of work that went into creating and refining this budget; the Friends of Rye City Schools, the Parent Organizations at all five schools, the Rye Teachers Association, community, parents, students and staff for all their hard work and support for the School District.”

Frank Alvarez, Superintendent of Schools said, “On behalf of the Administration, I would like to thank the Rye City School District community for voting in support of the Proposed 2015-16 School Budget.  This budget will enable us to maintain the high quality of the educational program that our community has come to value and expect.  We deeply appreciate the community’s involvement throughout the budget process and their dedication to the education of our youngest community members.”