Rye City Council has been considering the designation of a downtown historic district. It seems this was all prompted by the threatened closure of the beloved Smoke Shop.

Anyway, a recent city council minute write-up does an OK job of how this will work if adopted. We've also included the proposed map of the historic district. 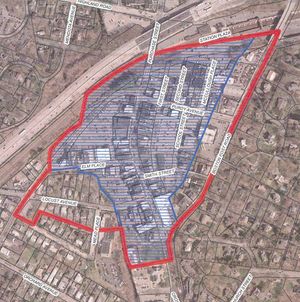 Here is the outtake:

Councilwoman Brett made a motion, seconded by Councilman Mecca and unanimously carried, to open the public hearing.

Councilwoman Brett provided background for the proposed local law.  The City is being asked to consider adding a Historic District, which is part of a law enacted in 2013 to provide tax exemptions  for  historically  sensitive  renovations  to  historic  properties,  in  order  to  allow properties in the district to be eligible for the exemption.  Currently the only properties eligible are landmarked properties.  The exemption only covers the amount of newly assessed taxes and phases in the increases over a ten-year period.  Corporation Counsel Wilson said that the Council will be considering creating the first historic district but only properties in the district that are deemed historic can apply for the exemption as long as the renovations are approved by the Landmarks Advisory Committee.

Rex Gedney, representing the Landmarks Committee, made a presentation regarding the proposal.  He noted the “checks and balances” in the local law which requires that application for the exemption must be made prior to any work being done plus review by the Landmarks Committee and then the Board of Architecture Review who would issue a Certificate of Appropriateness.  He said the legislative intent is to provide property owners of structures of historical significance a concrete incentive to restore and improve the properties while maintaining the character of the original structure.  The Landmarks Committee is requesting approval of a Historic District located around the Central Business District, which has the highest concentration of older structures, and contiguous neighborhoods.  The proposed Historic District has the support of the Chamber of Commerce and the Historical Society.  Sheri Jordan Director of the Historical Society spoke about the significance of the proposed Historic District and said that many of the homes that were built to house immigrants were located on the side streets off Purchase Street.  Mark Keegan, President of the Rye Historical Society, said the Board passed a Resolution in support of the creation of the Historic District.  Jerome Coleman of the Landmarks Committee noted that when the Council passed the original law in 2013 it did not contemplate the Council approving what constitutes a historic structure.

Mayor  Sack  asked  if  the  Landmarks  Committee  has  considered  making  a recommendation to the City Council that would be effectuated by the Council.  There was a discussion among the members of the Council regarding the process coming before the Council for approval.   Points raised included: creating an additional approval level might make the process more difficult for the property owner; land use decisions are normally made by the City’s land use boards; should decisions relating to taxation be made by an advisory committee that is not answerable to the citizens; after the Landmarks Committee makes its decision, it should come before the City Council for approval based on that recommendation; decisions made by land use boards affect the taxable value of a structure and the Board of Assessment Review also has the power to make decisions on taxes so it is not necessary for this to come before the Council;  the Assessor will make the decision on what the value of the property will be.