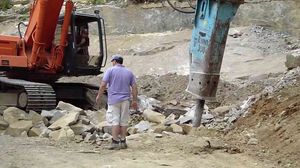 (PHOTO: A rock chipping operation not in Rye.)

In an opinion piece for MyRye.com, Rye resident Bob commentates on Rye's rocky road on policy (or lack thereof) in regards to rock chipping and dynamiting. What's your opinion? Leave a message in the comments below.

At the May 27th City Council meeting, establishment of a 6 month long 30 calendar day limit to rock chipping and dynamiting was discussed. The stated motivation for the limitation was to prevent a re-occurrence elsewhere in the City of the abusive rock removal experienced by the neighbors of 155 Highland Avenue while the Council works through proposals to regulate rock chipping for the future. I’d like to add my voice to those who say that this is a long called for step. As there will later be time to discuss whatever proposals are advanced from the Rock Chipping Committee, I focus the rest of my comments here on the proposed 30 calendar day limit.

Clearly 7 months last year plus more work this year caused undue suffering and represents a “taking” of the right to peace and quiet from the neighbors of 155 Highland Avenue. The proposed limitation to 30 calendar days of work would be a huge improvement over the current state in which no limitation exists. But is 30 days sufficient?

A month-long interruption of someone’s ability to work at home, the calm needed by those suffering from medical ailments and disabilities, or even the opportunity to read a newspaper in peace seems to be unreasonable. Given that the proposed legislation includes the opportunity to apply for a waiver from the 30 day limitation, a 15 day limit seems much more appropriate.

But is 15 days enough time for effective rock removal to take place? As Mr. Turiano, developer of the Highland Avenue project is credited with having told The Rye City Review, “.. most of the projects he has worked on that include rock chipping last anywhere from a few days to 15 days…” If true, the tighter 15 day constraint would not appear to create a material hardship for Mr. Turiano or other developers looking to change the face of our City.

I am unable to attend the City Council meeting on June 10th at which a limitation on rock chipping will be, hopefully approved. But I encourage all who care about their mental health and maintaining a livable Rye to attend the meeting and to make your feelings known. All government action needs to balance competing rights. In this case, the proposal is a start, but does not seem to have struck enough of a balance for existing neighbors.