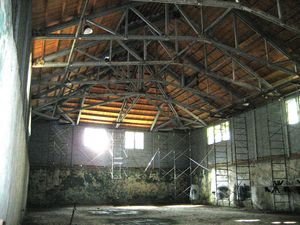 The Jay Heritage Center will stabilize and restore the wood truss system and copper trimmed skylights, as well as the stone foundation and clapboard siding. Improvements to the tennis house, constructed circa 1917, will facilitate historic usage and interpretation.

The grant is part of more than $6.2 million in grant awards to help 16 historically significant properties repair severe damage from Superstorm Sandy in 2012. Congressman Eliot Engel said,“Superstorm Sandy took a heavy toll on areas of the Long Island Sound, particularly Rye, which is still recovering from the damage almost three years later. The roof of the Palmer Tennis House at the historic Jay Heritage Center endured significant damage in the storm, and as a result was in desperate need of repairs. Now, thanks to Governor Cuomo’s allocation of $391,056 in grant money to the Center, the roof can be stabilize and restored, and this historic property can once again be enjoyed by everyone in the Rye community and beyond.” 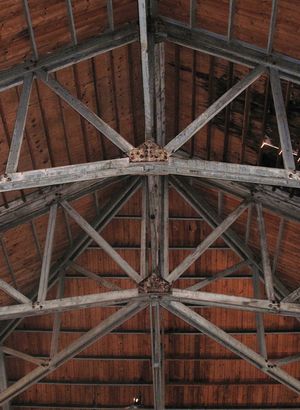 The Palmer Tennis House may be one of the oldest indoor tennis courts in the United States. It is a wood clapboard structure 60 feet wide by 120 feet long with massive 3ft thick and 10ft high foundation walls. A magnificent steel truss system supports the roof and is punctuated by 3 skylights over a clay court. A nearby stone wall has the date "1907" carved into it and early survey plans by Brinley & Holbrook in 1917 clearly identify it as a "tennis house." It predates the Raquet and Tennis Club in New York City, built in 1918 and JP Morgan's 1929 indoor tennis building on Jekyl Island which shares similar design elements.