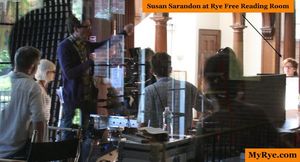 According to a report from Westchester County, Rye City has cleared over $100K in permit fees for movie and TV production in the last two years:

"The City of Rye reports that film has been a blessing for them as well, citing over $100,000 in permit revenue generated over the past two years. “Filming is good for our town,” says Diane Moore, Deputy Clerk. “Merchants see benefits and the town collects revenue. It’s also good exposure for Rye to the outside world.”"

Westchester County’s Office of Tourism & Film reports the film and television industry boosted the Westchester economy by $18 million in 2014, up from $13.8 million in the previous year. Assuming half, or $50K, of Rye City's $100K was garnered in 2014, Rye took just 0.28% (approximately) of the total economic benefit.