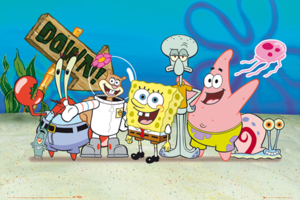 SpongeBob will hit the shores of Rye next Wednesday, September 2nd. An actual life size SpongeBob will wash ashore Rye beach around 6pm and then at sundown he'll show his movie “The SpongeBob Movie – Sponge Out of Water”.

For an “end of summer” evening of fun, Seaside Johnnie’s Restaurant at Rye Town Park is offering a “Dive-In” movie night on the beach.

The movie to be shown is “The SpongeBob Movie – Sponge Out Of Water.” It will be shown on Wednesday, Sept. 2nd. It was released in February of this year.

The movie starts at 8 pm, after it gets dark. As an added bonus, from 6 pm until movie time, the real SpongeBob Square Pants will be on hand to greet people of all ages.

The movie will be shown on a giant screen near the middle beach entrance. Children must be accompanied by adults.

However, when the top-secret recipe for Krabby Patties is stolen, SpongeBob finds that he must join forces with perpetual adversary Plankton (Mr. Lawrence) and come ashore. They must battle a fiendish pirate named Burger Beard (Antonio Banderas), who has his own plans for the delicious delicacies.

People should bring blankets or beach chairs. Picnicking is welcome, but no glassware or bottles are allowed on the beach. The Restaurant and snack bar will be open.

Rye Town Park’s parking entrance is at 95 Dearborn Ave, off Forest Avenue. Park neighbors are encouraged to walk to the beach.