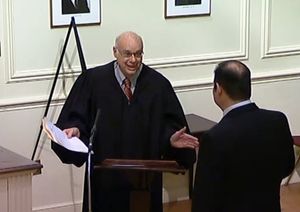 Peter was born on March 17, 1939 in Brooklyn, NY to William Lane, an educator and school principal, and Helen Lane, a teacher. After attending Queens College and Columbia Law School, he began what was to be an illustrious 50-year legal career that included advocating on behalf of numerous musical artists to recover their rightful royalties owed to them by record companies.

Peter also served as Rye City Court Judge from 1993 to 2010 and was appointed acting Westchester County Family Court Judge during that tenure. He was also active in Rye City and Westchester politics, serving as Chairman of the Rye Republican Party for a number of years. In 2013, Peter successfully ran in a local election for Rye Republication County Committee member. For the last few years, he wrote a regular column for the Rye City Review on politics and current events.

Peter married Susan Cotton on April 28, 1968, and they had two sons, Eric and Greg. They were married until Susan passed away in 2003. Later, Peter spent eleven wonderful years with his beloved partner, Madeleine Kleinman. Throughout his life, he enjoyed time with his family, boating in Long Island Sound, and traveling, particularly visiting his grandchildren in San Diego.

He is survived by his partner Madeleine, his sons Eric and Greg, his brother Jim, and his grandchildren, Dorah and Shaina. Friends and family will honor his memory at the Community Synagogue of Rye. The service is tentatively scheduled for 9:30 am on Wednesday, September 2, 2015.