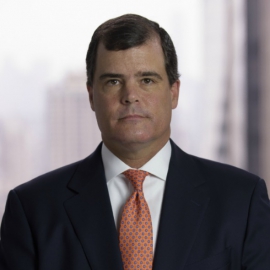 Rye resident and Kenyon College grad Philip V. Moyles was named as the new President of the Board of Directors for the The New York Police and Fire Widows' and Children's Benefit Fund.

The fund provides assistance to the families of New York City Police Officers, Firefighters, Port Authority Police and EMS Personnel who have been killed in the line of duty and has distributed over $130 million dollars.

Board Member Philip V. Moyles, Jr., Managing Principal & CEO of Vanbridge LLC, has been named the new President of the Board of Directors. Mr. Moyles, a resident of Rye, New York, has served on the Board since May 2007 and is also a member of the Board's Executive Committee.  In this new position, Mr. Moyles will oversee the day to day operations of the Benefit Fund and further the Benefit Fund's mission to support the families of New York City's fallen first responders….

"We're thrilled to have Phil Moyles as our new President," said Chairman of the Board, Stephen J. Dannhauser.  "Phil is a terrific leader and brings a tremendous amount of energy to the table.  We have no doubt that he will do a great job in this new role and make a big difference in the lives of the hundreds of families that we serve."

We're also very lucky to have Kevin Parker and Larry Schloss serve as Vice Chairmen of the Board.  In these roles, Kevin and Larry will continue their outstanding efforts to support our families and we're very grateful to them for their dedication of time and effort to further our mission."…"