Avon Products is laying off 2,500 employees worldwide. It's facility is Rye will remain although it is not clear what will happen to the local employee count:

"Avon Products Inc. said that it will lay off 2,500 positions worldwide, both filled and open, and shift its corporate headquarters from New York City to the United Kingdom in due course.

However, the company stated that it will maintain its New York incorporation and continue trading on the New York Stock Exchange under its existing ticker symbol. The company will retain its current research and development facilities in Suffern and Rye in New York… 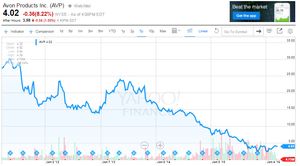 (PHOTO: The five year chart… much better when it goes up and to the right…)

This step comes in the wake of the 130 year-old company’s disposition of its troubled North American business to a private-firm Cerberus Capital Management, L.P. in a complicated transaction. As part of the sale transaction, the company separated its North American business into a privately held company, in which an affiliate of Cerberus holds the majority stake and operational rights. However, Avon retained a minority stake (20%) in the newly formed New Avon LLC. The transaction injected about $435 million into Avon in the form of an investment from Cerberus’ affiliate and $170 million to acquire an 80% stake in the new North American company.

With the completion of the sale, Avon now has major operations outside the U.S., across multiple geographical regions."