Home Schools 150+ Turn Out for Forum on Teen Drug & Alcohol at Rye...
Schools

One hundred and fifty plus turned out last Wednesday for Rye High's forum on teen drug and alcohol abuse. Big thanks to Sarah Derman at the Rye City School District who submitted the following report on this important night.

Lilly Neuman – Community and Education Outreach Coordinator from St. Vincent's was the moderator. 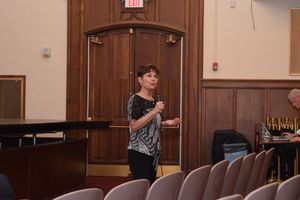 Susan Salomone – Founding member of Drug Crisis in our Backyard. She spoke about the loss of the couple's son Justin almost 10 years ago. She talked about the history of DCioB and outlined some of the warning signs they missed in their son's behavior. 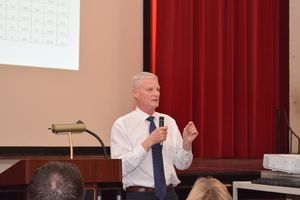 Steve Salomone – Founding member of Drug Crisis in our Backyard. He talked about his own upbringing and experiences vis-a-vis alcohol and drugs led him to believe these things are a rite of passage. Therefore, he was not tough on his son when they found him in possession of marijuana. He discussed how he and his wife differed in their opinions about the seriousness of the offense, and how Justin played the parents off one another to distract them from the real issue – his escalating drug use. He talked about how Justin moved to psychadelic mushrooms, to painkillers – which to Mr. S were the "game changer," to heroin. He told kids that once you start down this path "your life will never be the same." 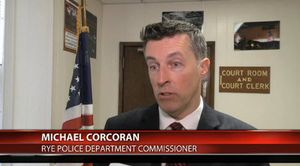 Rye PD Commissioner Michael Corcoran talked about how the Rye-ACT forum produced some "sobering statistics" about Rye. He described the new protocols that he has put in place since coming to Rye, his intention to have a Zero Tolerance community, and to enforce the ABC laws. He said that adults who serve to youth will be prosecuted. He noted that youths caught with illegal substances will also be prosecuted – 16 is an adult in the state of New York. He covered a lot of the same ground he did at the Rye-ACT meeting – that there is a new full time Youth Officer, that he intends to implement an Adopt-A-School program wherein 8 handpicked officers will be in the schools developing relationships with youngsters. 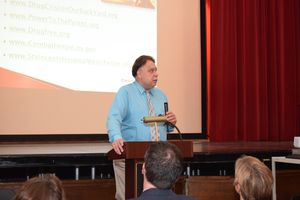 Ray Dorritie, PhD and Addiction Specialist for over 30 years. He talked about how prevention starts in the home. He recommended parents interact with the parents of the kids your kids associate with to find out what their stance is about alcohol and or drug use in their home. Parents need to be united as a couple. The drugs today are a "whole new ballgame" – much stronger than those of the past. He talked about having clear, consistent boundaries. He discussed how the age of onset of use is one of the strongest predictors of drug use. Parent values and modelling are very important. Parents must educate themselves about social media, You Tube, Facebook etc. because kids learn about drugs on those medium. He said we can't depend on the police and the schools to do it all – while they can help and support us, we have to do the hard work as parents to confront kids if we have concerns.