Home Green Coyote Warning Hearkens Back to Rye in 2010
Green

Coyote Warning Hearkens Back to Rye in 2010

Earlier this week, the Rye PD sent out an advisory on coyote sightings… 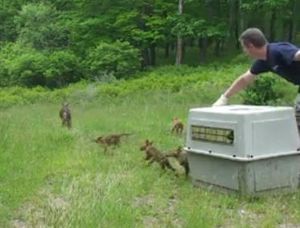 (PHOTO: in 2010, Rye's Grizzly Adams AKA Jim Horton releases a mother coyote and her eight pups to a new location after trapping them on the Rye Golf Club.)

Coyotes are notoriously shy animals, typically steering clear of human contact. But if you were living in Rye City in June 2010, you'd remember Rye was tossed into the national media spotlight for two bizarre and rare incidents where coyotes jumped on children. A trapper was called into the city and at least some of the Rye coyotes were relocated.

We asked Rye Polish Commish Michael C. Corcoran, Jr. what prompted the warning and he told MyRye.com "Just some recent sightings. Families with children are a little concerned. We are in touch with the DEC and waiting to hear back."

Have you seen coyotes in Rye recently? Leave a comment below…

Here is the note that was issued by the PD:

– IF ONE APPROACHES YOU:
o BE AGGRESSIVE:
 LOUD NOISES AND FORCEFUL BEHAVIOR
WILL NORMALLY SCARE THEM AWAY
-WAVE YOUR ARMS & THROW STICKS/STONES
*** SMALL CHILDREN SHOULD ALWAYS BE SUPERVISED WHEN OUTDOORS