Colin Moran of Rye joined his family's baseball dynasty B.J. and Rich Surhoff this week when he was elevated to the Houston Astros this week: 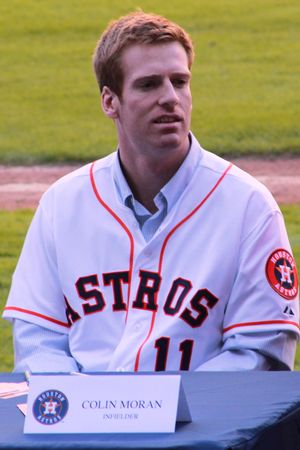 "The Houston Astros promoted former Iona Prep star Colin Moran on Tuesday, May 17 prior to the start of a three-game series in Chicago against the White Sox.

Colin Moran was the sixth overall pick in the 2013 MLB draft.

Moran, a third baseman from Rye, was dealt from the Marlins to the Astros in 2014.

Moran's uncles, B.J. and Rich Surhoff, both played in the Major Leagues.

When the Astros acquired Colin Moran in a trade two years ago, the former Iona Prep star immediately became their presumptive third baseman of the future. That future began Tuesday night in Chicago when Moran joined Houston for its series opener with the first-place White Sox.

The 23-year old from Rye received his first big-league call-up Monday night, according to family and friends. His parents, Bill and Diane, flew to Chicago Tuesday morning. The move wasn't official until Tuesday afternoon when the Astros made three moves, highlighted by All-Star center fielder Carlos Gomez heading to the disabled list and Moran joining the roster.

"I kind of just think about all the times in the backyard with my dad and I think about all the different coaches I’ve been lucky enough to have," Moran told reporters. "Everything that went into this, it was hard not to get emotional and just try to soak it in."

The sixth overall pick in the 2013 draft, Moran hit .288 with a .331 on-base percentage, three home runs and 22 RBI in 32 games this season with the Triple-A Fresno Grizzlies. He is a career .299 hitter with a .356 on-base percentage in three minor-league seasons. According to MLB.com, Moran began the season as the No. 6 prospect in the Houston organization…

Once he debuts, Moran will become the third big-leaguer from his family, joining uncles B.J. and Rich Surhoff, who both starred at Rye High School. Rich, a right-handed pitcher, split the 1985 season with the Phillies and Rangers. B.J. played 19 seasons with the Brewers, Orioles and Braves after being selected as the first overall pick in the 1985 draft. When Moran was drafted three years ago, he became the highest pick from Westchester County since Surhoff."