Seinfeld, Car & Nothing in Rye 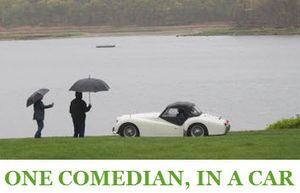 (PHOTO: One comedian, in a car… at Wainwright. Credit: Mary de Barros.)

Another day in Rye and nothing happened. This time with Jerry Seinfeld.

The comedian showed up at Rye's Wainwright House to film an upcoming June episode of his online show Comedians in Cars Getting Coffee. The production company found a photo of Wainwright House online and decided the stately looking venue would be a perfect backdrop for the 1959 English Triumph TR 3 Seinfeld drives in the episode.

The episode will feature Seinfeld having coffee with John Oliver, but apparently the "coffee talk" is shot somewhere else and only Seinfeld was at the Wainwright shoot. "There is nothing set up for Seinfeld to come back to Wainwright to film with John Oliver. I wish he would," said Mary de Barros, Events Coordinator at Wainwright House.

"But usually, the actual drinking of the coffee and the interaction between Seinfeld and the other comedian is done in a restaurant.
I haven't heard where or when that will take place. He was very nice and friendly when he came here. We told him to come back anytime."

The production company made a donation to Wainwright House.

(Updated) Wainwright House will hold an interfaith prayer vigil for Ukraine this Sunday at 5:00pm outside on their grounds at 260 Stuyvesant Avenue. Attendees are...
Read more