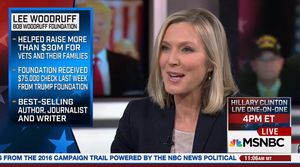 (PHOTO: Rye's Lee Woodruff on MSNBC explaining the $75K gift her foundation received from The Donald. Watch the video below.)

First, we had the Rye connection to Rye resident Michael Sexton, one of the masterminds behind the "fake" Trump University. Then we had Rye resident and Fox News anchor Megyn Kelly, who tangled with The Donald in the presidential debates and recently made nice-nice in a Fox New prime-timer.

Now the Bob Woodruff Foundation, run by Rye's Lee and Bob Woodruff, has accepted $75K from The Donald J. Trump Foundation. Bob Woodruff is a correspondent for ABC News who was injured ten years ago while reporting in Iraq.

The $75K was part of over $5 million donated by the presidential candidate's foundation. The media chased Trump to back-up his claims of donation and it seems some of the money was allocated after the media applied pressure. The PR man for the Bob Woodruff Foundation, which has raised over $30 million for wounded vets, told The Hill:

"We received a check for $75,000 last Wednesday," Kille told The Hill. "We were told a day before a check would be coming."
Kille said the donation was a surprise because the Woodruff Foundation did not have a past relationship with Trump or his foundation."

As mentioned before, it appears at least some of the donations were made under the pressure of the presidential campaign. This from People.com:

"I'm not looking for credit," the presumptive Republican presidential nominee said in a combative press conference at Trump Tower in New York, where, on live TV, he read down a list of the 41 veterans' charities receiving a total of $5.6 million from Trump's Jan. 29 fund raiser.

His Democratic rival, Hillary Clinton, was not impressed. "He's bragged for months about raising $6 million for veterans and donating a million dollars himself," Clinton said on CNN. "It took a reporter to shame him into actually making his contribution and giving the money to veterans."

Also, listen to the WNYC story. And watch Lee Woodruff on MSNBC: