Rye's Megyn Kelly, the Fox news anchor and part time Rye resident ho rose to further fame during her clashes with Donald Trump, is the subject of a Roger Ailes meme making its way around the Internet. 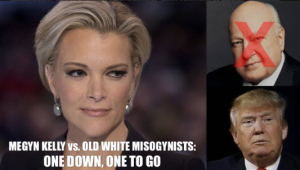 Ailes was the overlord who built Fox News for twenty years. Some think Kelly put the final nail in the Ailes coffin by not pledging her support as the Ailes situation deteriorated:

Roger Ailes, the powerful Fox News chief, first realized his career at the helm of the network he built was in jeopardy when evening anchor Megyn Kelly refused repeated overtures to issue a public statement of support, according to a source familiar with the internal discussions.

At the center of this year’s presidential campaign, Kelly was being asked, cajoled and even pressured outright to pledge her support for Ailes in the first days after sex-harassment claims were lodged, two sources said. And when Kelly declined to play along, a sense of doom quickly creeped over Ailes and his cabinet of advisers.

“And what about Megyn?” was the question asked inside Ailes’ war room. “There’s a problem with Megyn. Let’s talk offline.”"

Read the rest of the ABC story.