Usually Rye City Council meetings get interesting inside the building during "open mic" — the item on the agenda each meeting called "Residents may be heard on matters for Council consideration that do not appear on the agenda".

But this Wednesday the action will be outside Rye City Hall as former Rye Golf Club (RGC) Workers that were allegedly cheated under the scandalous reign of former RGC Manager Scott Yandrasevich, stage a protest. 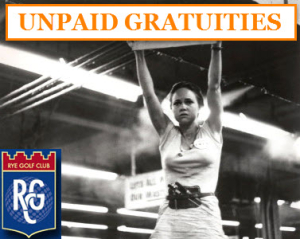 (PHOTO: RGC Workers want what is due to them…)

The workers, through New York City law firm Pelton Graham, is pursuing a class action to recover $4 million. Plaintiffs have calculated that nearly $2 million in gratuities were improperly retained by RGC and their lawsuit seeks in excess of $4 million including applicable penalties, interest and fees. The firm originally started with nine named plaintiffs - waiters, bussers/runners, bartenders, kitchen staff, dishwashers and other hourly employees who worked for the City of Rye, Rye Golf Club and/or RM Staffing & Events Inc. – and now this numbers 54 plaintiffs.

In a recent court order (something called a Rule 23 motion), Rye City now has to supply a list of former employees and Alison Mangiatordi of Pelton Graham told MyRye.com "We anticipate approximately 200 employees will be on this list. This is an opt-out class, meaning that everyone on the list will be included in the class unless they decide to opt out."

As to the reason for the protest Wednesday, Mangiatordi said "The goal of the upcoming Rally for Workers’ Rights is to spread the word regarding the injustice that these workers have faced. We feel that residents of Rye will be appalled to find out that its workers have been cheated out of their wages and gratuities which Rye Golf Club customers intended to go to them." And asked where the money will come from if the workers win the case, Mangiatordi finished "We know that Rye recovered $1.55 million from a settlement with Travelers’ Casualty and Surety Co. in February of 2016 which reimbursed the City of Rye for money stolen in the fraud scheme perpetrated by Scott Yandrasevich. We feel that this money should be used to compensate the workers whose tips and wages were stolen as a result of the fraud scheme. We don’t know if the City of Rye has any other insurance to cover additional damages."

Just to be complete, here is the PR release sent by the plaintiff's firm Pelton Graham…

On October 9, 2012 in public testimony before the Rye Golf Club (“RGC”) Commission, Scott Yandrasevich, former RGC Manager admitted that RGC employees who worked at RGC’s Whitby Castle did not receive gratuities and service charges that were left by customers. Specifically, Yandrasevich stated that “gratuities, if they are left, go to the club” and that this gratuity money becomes “part of the restaurant revenue…”. Plaintiffs have calculated that nearly $2 million in gratuities were improperly retained by RGC and their lawsuit seeks in excess of $4 million including applicable penalties, interest and fees.

On December 23, 2013, a group of nine (9) current and former waiters, bussers/runners and bartenders at RGC’s Whitby Castle filed a class and collective action lawsuit against the City of Rye and Rye Golf Club. Following notice being sent, nearly fifty (50) employees have joined the lawsuit. On July 29, 2016, after substantial discovery had been completed in the lawsuit, the Court granted class action certification, allowing all waiters, bussers/runners, bartenders, dishwashers, kitchen staff, and all other hourly employees who worked for City of Rye, Rye Golf Club, and/or RM Staffing & Events, Inc. at any time from December 23, 2007 through the present to participate in the action.

Not only did Yandrasevich admit that tips were taken from workers, the law is clear that gratuities left by customers for service employees must be given to workers, not retained by an employer. The City of Rye has known that RGC improperly retained tips since October 2012, and has done nothing to reimburse workers for the misappropriated gratuities. While Rye settled a claim with Traveler’s Insurance Company for unpaid theft of services and City funds by Scott Yandrasevich for $1.55 million in February of 2016, the City of Rye has refused to return the misappropriated gratuities to the workers who have earned them.

Justice requires that Rye, one of the wealthiest communities in the US, must ensure that their employees receive the gratuities that they earned serving RGC members and guests. Please join us at Rye City Hall on August 3rd at 7:00 pm to show your support for Rye Golf Club workers!