Home Sports It's Rye Football Time: The OG is Back with a 2015 Season...
Sports

It’s Rye Football Time: The OG is Back with a 2015 Season Recap

There are folks rabid for Rye Garnet football. And then there is the Old Garnet (The OG). We are pleased to have the OG back at MyRye.com. You'll see his commentary through the season. 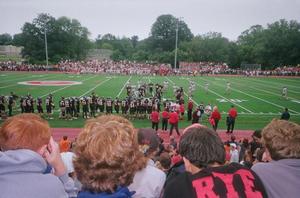 (PHOTO: In a 2008 match up, Rye Garnet football washed out the Harrison Huskies in a decisive 28 – 3 victory.)

When battling the SOMERS TUSKERS it always seems it is the season opener, is always an away game at Somers’ Big Top, and the two teams each carry tight-rope high pre-season rankings.  2015 was no exception.  There is no better Section One coaching match-up than Somers’ ringmaster, Tony DeMatteo battling to get any advantage over Rye’s maestro, legendary Dino Garr.  DeMatteo went to the heights of trickeration when the stadium lights blew causing the game to be stopped, suspended and restarted the following morning.  The pause was to Rye’s liking as the Garnets enlightened the plodding pachyderms 21-6, trapeezing to 8-5-0 (.625%).

In the home opener it was the ghostly, swift and perilous SLEEPY HOLLOW HEADLESS HORSEMEN trotting into Rye’s Nugent Stadium.  While these chapters are always scary, never sleepy The Horsemens’ deep, throaty “Hollow High” chant and horseshoe helmets serve to give them an aura and mystique far greater than any of Washington Irving’s legendary fables.  It’s always a thriller with Rye in the saddle barning the Horsemen 48-20 and cantering to a 27-12-1 (.692%) snoring over this relative of Ichabod and Rip.

Tuskers to start and Huskers in the third slot, the YORKTOWN HUSKERS are at Nugent for a replanting of the 2014 Section One Class A Final.  We detect a budding rivalry being cultivated as the Garnets again harvest victory 31-20 popping to 3-0-0 (1.000%).

Can’t cage the WALTER PANAS PANTHERS no way, no how, but Rye claws its way to a seesaw 32-18 mauling of these cats.  The Panthers would pounce and the Garnets would counter with a haymaker.  Back and forth until the Garnets finally dominate and domesticate these Shrub Oak felines.  Fortunately for Rye’s faithful there was shuttle bus service from the parking lot to the field or the Garnet boosters would have missed the first half of clawing action. Rye purrs to 7-0-0 (1.000%) domination.

Drawing players from multiple municipalities?  Recruiting talented athletes?  A private school playing in a public school league?  Yes, Yes and Yes as the OUR LADY OF LOURDES WARRIORS from Poughkeepsie battle the Garnets for the first time since 1997 on a rainy night at Nugent.  Due to recent dominance at lower levels, these braves were elevated from Class B by Section One schedulers to, as they say, “even the playing field”.  Rye squishes the Warriors 13-7 spearing the historical ledger to 2-1-0 (.667%) as the Old Garnet foresaw a distinct possibility of a rematch of these two squads later in the 2015 campaign.

Rightfully returned by the Section One masterminds to the season finale, the Garnets pet pooch the HARRISON HUSKIES hosted Rye in the 85th renewal of Rye/Harrison.  Due to the Class A pre-season rankings of Rye (#1) and Harrison (#15), the long-standing rivals were lucky to play at all as rivalry survival was debated and horse-traded during Class A pre-season scheduling meetings.  Rye is firmly in control but not fully mastering this pack of pups as the Garnet yank the Huskies’ leash, curbing the dogs 28-14. Rye moves ever-closer toward series parity, trailing 40-42-3 (.488%).  2015 marks 12 out of 13 favor Rye since 2003, a series high-water mark.

SECTION ONE CLASS A PLAYOFFS

Surprise, surprise – woof, woof!  Guess who saunters into Nugent to kick-off the 2015 playoffs?  None other than the hated HARRISON HUSKIES, the last (8th seed) team invited to the playoffs.  While it is the second dog walk of 2015, it is also the 86th time for Rye and Harrison.  The overmatched Huskies bark and snarl with the Undefeated, Untied Regular Season Class A Champion (#1 seed) Rye Garnets.  And, oh yes it’s another first in Westchester’s greatest football rivalry as Rye and Harrison face-off in back-to-back games/weeks for the first time, ever.  Harrison flubs the initial kickoff and the Garnets capitalize.  It’s all downhill for the mutts as Rye doghouses the Huskies 34-6, advances within striking distance of equality at 41-42-3 (.494%) and marches to the Class A playoff quarter-finals.  Make the most of these opportunities Garnets as the Huskies will not be doormats forever.

In only the fourth encounter with the HENDRICK HUDSON SAILORS these boatmen were below decks all night as the Garnets imitated a tidal wave in Blind Brook 35-16.  Catching the rising tide and favorable trade winds the Garnets breeze at 3-1-0 (.750%).

The Garnets advance to the Class A semi-final round versus the YORKTOWN HUSKERS in a rematch of the season’s third contest.  Based on the regular season records and Piner Points System, Rye, with the highest seeding, captures a home contest against the always physical Huskers.  This one is no exception and predictably was a bone-crunching, barn-burner as the Garnets squeak 15-14 on a game-winning, late, fourth-quarter field goal to keep their corn field fertilized at 4-0-0 (1.000%).

It is for all the Class A marbles as the higher seeded Rye Garnets repeat with the OUR LADY OF LOURDES WARRIORS. But make note – Rye travels sixty miles to neutral-site Arlington High School, a mere twelve miles from Lourdes’s Poughkeepsie campus.  Let’s see the fairness here – the higher seeded Garnets travel an hour while the lesser ranked Warriors bus only fifteen minutes?  Incidentally and coincidentally the 2015 Class A playoffs provide three rematches of regular season tilts – Harrison, Yorktown and now Lourdes.  Can the Garnets finish the season as the Undefeated Class A Champions?  It’s a tough tussle against these braves as the Garnet fourth-quarter drive fizzles with Rye short 14-7.  Lourdes evens the battles at 2-2-0 (.500%).  In two games versus Lourdes the total points scored were 21 for the Warriors and Rye at 20 – two evenly matched squads I would say.  Rye’s season falls short of “States” as Lourdes makes it all the way to the Class A State Final in Syracuse before falling.  One wonders if the Garnets beat Lourdes in the sectional final and escaped Section One, how far might the 2015 Rye Garnets have gone?  Finishing as the Undefeated Class A Regular Season Champion is no small task, nor is a 9-1 season tally.  It is widely known Class A is the most difficult classification in Section One.  Congratulations to the 2015 Rye Garnets players and coaching staff.