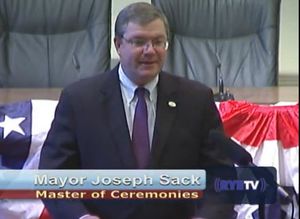 The Rye Playland saga continues. If the local community does not feel part of the plan, what does Astorino expect? LoHud has the details:

"RYE – The city is taking legal action against Westchester County over proposed changes to Playland, the county-owned amusement park.

An attorney for Rye filed legal papers Thursday challenging the county’s decision to declare itself the lead agency for projects at the park under the state Environmental Quality Review Act.

“The last thing in the world we wanted to do was to have to file this petition but we didn’t have a choice,” said Mayor Joe Sack.

The city has taken the stance that any construction projects that fundamentally change the park should go through the regular permitting and approval process of Rye’s land-use boards.

Sack said the city filed the Article 78 after being left out of the process to hand over management to a company called Standard Amusements.

As part of that deal, the county and company are spending a combined $60 million to improve rides, amenities and the deteriorating Art Deco infrastructure of the Long Island Sound-front park. Projects include a repaved parking area and new rides and concession stands.

Nicholas Singer, the Harrison native behind Standard, said in a statement the public-private partnership “does right by its citizens.”

“We have grave concerns about the city of Rye’s apparent efforts to harm its own citizens and waste millions of dollars of Rye and Westchester County taxpayer money with a meritless lawsuit," he said…

The legal action creates one more layer of complexity around the enlisting of the private sector to run the park. Westchester County Executive Rob Astorino, a Republican, has sought an operator for the park which routinely runs in the red, since he came into office in 2010."