The Rye Arts Center is bringing live music downtown for a second time this Thursday. 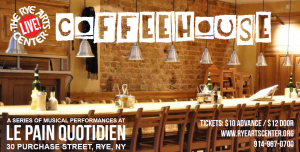 The RAC started the series back on September 29th, adding excitement to the nightlife of Rye (low bar, but guess that's the way we like it in the sleepy suburbs!). The performance series is at Le Pain Quotidien on Purchase Street.

Each evening will introduce you to new singers, songwriters, and bands who will share their unique sounds with you in this intimate setting. Come out for an evening for food, drink, and great live music. A third evening is already planned for Thursday, November 10th.

Bruce Carroll (click for SoundCloud) (7pm) is a singer-songwriter and Westchester native who has spent a lifetime writing, recording and performing his original music in the Northeast (as well as fifteen years at the helm of his own venue, the famed Watercolor Cafe in Larchmont, NY)….His latest release, “Ruckus and Romance”, is a rumination on life, love, and loss in the style of Tom Waits and Bob Dylan, but with a voice distinctly his own….

Doug Shanahan (click for YouTube channel) (8pm) is a New York based guitarist and singer who has played in numerous bands over the past 20 years. He performs as a solo acoustic artist doing cover songs ranging from classic rock to folk music and modern hits. Doug has hosted several open mic nights over the years in the Westchester area and when not performing he can be found recording original music in his home studio.