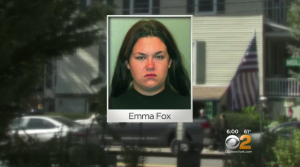 Emma Fox, the 24 year old Rye woman who arrested a week ago in a drunk driving fatality that killed Manhattanville College student Robby Schartner, appeared in court again Monday. Fox, held on $100K bail, remains on suicide watch. Services for Schartner were held at Resurrection Church this past Wednesday.

"A distraught-looking Emma Fox, accused of driving drunk when she struck and killed Manhattanville College student Robby Schartner, stood silently with her head bowed as she made her second appearance in White Plains City Court on Monday.

Fox, 24, remains at the Westchester County Jail on $100,000 bail, and her lawyer said she continues to be on suicide watch following the Oct. 9 incident that killed 21-year-old Schartner, a lacrosse player at the Purchase college.

"Our conversations are intermittent with tears," said her attorney, Stephen Lewis…

Schartner, a graduate of Brookfield High School in Connecticut, was a junior at Manhattanville. His death shook the Purchase campus, where he played on the lacrosse team and wore the number 3.

Banners bearing his team jersey number have become a symbol of remembrance for friends and family. At his funeral Mass at the Church of the Resurrection in Rye on Wednesday, teammates and friends held up three fingers in his memory, while a banner with "#3" hung from a Purchase fire truck outside."

Read the full story at LoHud.com.

Facebook
Twitter
Email
Previous article“Scared by the Sound” Haunted House Has Returned to Rye Playland
Next articleMultiple Injuries, Including One Critical, at Motor Vehicle Mess at Rye’s Westmed Complex