The tragic death of Jack Usry remains under investigation, according to LoHud.com. Usry's funeral is on Wednesday at 9am at Resurrection. 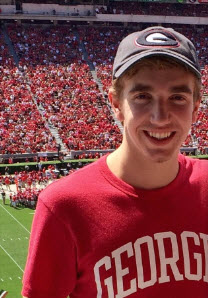 LoHud story excerpt and the full obituary can be found below:

"Authorities have not yet released a cause of death for a 20-year-old Rye man found outside an apartment building in Manhattan on Friday morning.

The body of Jack Usry was discovered "unconscious and unresponsive" just before 10 a.m. on the ground-level scaffolding in front of a building on East 34th Street, according to the New York City Police Department. His death remains under investigation, the New York City Medical Examiner's Office said late Monday afternoon…"

See the full story at LoHud.com.

Jack Usry, the beloved middle son of Greg and Mary Beth Usry, passed away on November 4, 2016 after an accident in New York City. In addition to his parents, he is survived by his loving brothers Connor Usry of New York City and Quinn Usry of Rye; his grandparents Ken and Carol Neisser of Poughkeepsie, NY and George and Lynn Usry of Clemson, SC; and his great-grandmother Louise DuBose of Clemson, SC. Jack was the nephew of Megan Neisser of Stamford, CT; John and Linda Neisser of Southbury, CT; Teddy Neisser of Olyphant, PA; Matt Usry of Greenville, SC and Alan Usry of Athens, TN. Jack was also the cousin of Jonathan, Nicole, Kevin, Lauren, Kristy, Alyssa, Zarin, Ben, Elouise and Sarah Beth.

Jack was a 2014 graduate of Rye High School in Rye, NY and was a junior pursuing a BFA in Photography at the Lamar Dodd School of Art at the University of Georgia. Jack was a creative, adventurous spirit who was loved by so many people from the different areas of his life. He also left a lasting legacy of his art on his website jackusry.com. You are welcome to take a quiet moment and remember him through his extraordinary work.

Friends may call at the Graham Funeral Home on Tuesday November 8, 2016 from 4 PM to 8 PM. A mass of Christian Burial will be celebrated at the Church of the Resurrection in Rye, NY on Wednesday November 9, 2016 at 10 AM. In lieu of flowers, donations may be made in Jack’s memory to Part of the Solution (POTS), 2763 Webster Avenue, Bronx, NY 10458 – potsbronx.org.

Facebook
Twitter
Email
Previous articleShow Me the Money (And the 2017 Budget!): Items on the Rye City Council Agenda for Wednesday, November 9, 2016
Next articleRAC Live Music Coffeehouse Series This Thursday, on Purchase Street