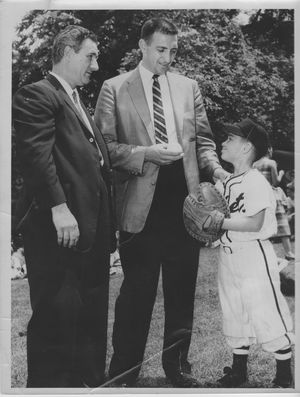 Family and the baseball world said goodbye to baseball great Ralph Branca on Tuesday at Resurrection Church in Rye. Branca, who passed last Wednesday at age 90, was a pitcher for the Brooklyn Dodgers best know for "The Shot Heard Around the World" – the three run home run he gave up to Bobby Thompson of the New York Giants that lead to the Giants' victory in the National League playoffs in 1951. 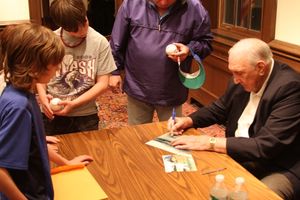 (PHOTO: Branca, on right, and this writer's oldest son, an aspiring sports writer then age 8, on left receiving an autograph. A great memory.)

Branca lived on the grounds of the Westchester Country Club before entering a home in Rye Brook. In 2007 Branca spoke at the Rye Free Reading Room, in one of the most spellbinding talks on sports this writer has ever witnessed. He had 100 or so Rye residents on the edge of their seats with tales from baseball in the 1940s and 1950s.

"RYE – Mourners gathered today to say a final farewell to Ralph Branca, the Brooklyn Dodgers pitcher from Mount Vernon who gave up the home run dubbed the “Shot Heard ’Round the World.”

Congressman Peter King was among those who attended Branca's funeral at the Church of the Resurrection in Rye.

Branca died Wednesdayat the age of 90 in a nursing home in Rye."

See the full story and the original obituary.