Letter: Rye Resident on Julie Killian and The “One-note Samba of “Term Limits” 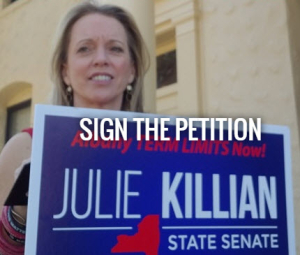 “Term limits” is the one-note samba that legislative hopeful Julie Killian plays over and over and over again. There’s even a petition on the home page of Killian for Senate.

Term limits is an interesting cause célèbre for Killian, a politician who was appointed her first go-round on the Rye City Council, and then ran as an incumbent for two more terms.

At first hearing, “term limits now!” makes for a nice sound bite. Get rid of all the dead wood! Sure, government is the problem – right?  It takes regular folk like you and me to clean up government. There’s a ring of populism in “Term limits now!”

In reality, term limits result in the absolute opposite of populism.

Give the notion of term limits a moment of thought. Common sense will tell you, term limits is a bad idea. Consider the cost of running for public office:  what qualified person would subject themselves to the grueling fundraising process only to be guaranteed to be out on their ear in two years? Or even six years?

A little common sense applied to term limits, and you can see it creates an elected ruling class – one with money and connections but lack of experience. And that inexperience, coupled with begging for donations for campaign costs, makes the newly-elected official owing favors to donors and lobbyists. Big time.

The research backs up common sense when it comes to term limits.  For example, The Public Policy Institute of California concludes:

This 2013 article in Crain’s gives a concise rundown of the down side when it comes to term limits, and a piece in The Washington Post on the efficacy of term limits presents this:

“The influence of lobbyists in Michigan was not only maintained, but it may have been magnified by term limits, a research team found in rounds of interviews with lawmakers there. Lobbyists were also among the three most-cited determinants of whether a bill made it to the floor, they found."

Term limits may not be “all bad” – but they’re definitely not a cure-all.

So why has Killian made this the centerpiece of her campaign?

First, we see the ubiquitous ad-buys for Killian. Just turn on local TBS or even the World Series playoffs and you’ll see an ad for her. The primary response isn’t to look at her experience – or lack thereof – but to wonder “She must have a heckuva war chest!”

While Killian’s war chest is overflowing to the point where she can purchase slick ads and advisors, there’s a curious oversight when it comes to content. Is her team relying on public ADD here as well as with term limits? You can admire the relentlessness of her campaign but pause at oddities like the insinuation that her opponent, George Latimer, was asleep at the switch when it came to sexual harassment in Albany. Not only is there a 12-year gap between the allegation and Latimer’s service in the state legislature, but the fiber of the spokesperson’s character is well-known locally. All this results in a collective chuckle about Killian’s capacity to properly vet not only platform issues, but spokespeople.

It’s the gift that keeps on giving. Every time it’s aired you can hear the laughter from Rye households up to Croton. No wonder Killian supports term limits – she’ll never have to be haunted by this mortifying decision after serving her one term should she be elected.

And when asked about municipal funding of public projects, all Killian can say is she will make New York State end the scaffolding law, thus saving millions of dollars.

…don’t ask yourself “how” this will be done by a state senate hopeful who opens her debates by stating her experience is as a mom and a sister, let’s get to the possible “why”.

Abolishing the scaffolding law will not save taxpayers money. But it will save private industry money.  When you look at Killian’s donors on the Elections.gov page for New York State, there are some whopping big donations over $2,500 and up to $11,000.  There are several big donors who are in the building – aka scaffolding – business, realtors, and even an infamous bankster.

This kind of one-percent lifestyle is something Julie Killian is used to, making her the perfect candidate…for someone who believes instituting a plutocratic legislature through term limits.

Wall Street is hard-wired into Killian’s lifestyle. Her husband worked at Lehman Brothers and fortuitously got out 6 months before that company went bankrupt. The Killians must be consulting with an astrologer as well as with campaign strategists in the Atwater and Rove traditions! A few more weeks, and Mr. Killian would have had his bonuses and benefits clawed back.

All this explains the one-note samba of “term limits” – it’s a tune to which lobbyists, special interests, and the one percent can dance.