Update on Rye High School Crew, from the Head of the Schuykill in Philadelphia October 30th.

RHS Crew competed in 13 races from single trainer to varsity eights plus coxswains, in both men’s and women’s. The future is looking bright as the novice boys quad earned a bronze, out of 17 boats, with a time of 17:02120 over the 2.5 mile course. 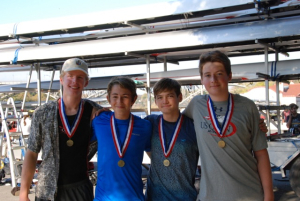 Other notable finishes were the men’s varsity double (Tim Rudolph-Math and John Dailey) who placed 2nd out of 31, with a time of 16:32.286.

The previous week, at the Head of the Charles in Boston, on Sunday October 23rd, RHS’s men’s varsity four with coxswain earned a bronze, out of a field of 85 boats, all the more remarkable as they are a lightweight crew in a heavyweight race.

The final race of the crew season happens at the Bill Braxton Memorial Regatta in NJ on November 13th. Go Garnets!