Rye PD announced it shut down an under aged drinking party with @ 50 kids this past Saturday night on Central Avenue. Homeowners were not home, according to the police. A 17 year old was arrested for pushing a police officer. Besides being a stupid move, that's a good way to nuke your college application…

See Lauren Rosen's column from this past June on Rye ACT, Drugs & Alcohol in Rye and the 5,000 Missing Pieces. 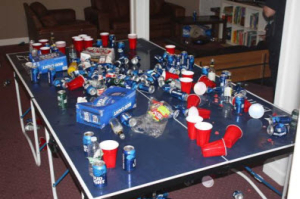 (PHOTO: If this is your ping pong table, Rye PD wants to speak with you.)

The news release from Rye PD:

On Saturday night, November 19, 2016, Rye Police responded to a Central Avenue residence on a report of a large under aged drinking party. Upon arrival, Rye officers observed multiple minors holding what appeared to be alcoholic beverages. Boxes and numerous cans of beer were scattered throughout the kitchen. Officers estimated approximately 50 minors in the home. Many fled upon observing the officers.

Damage observed to the home included: spilled liquids, vomit, broken picture frames and a hole in one of the walls. The homeowners were not home at the time this incident occurred.

During the investigation, one of the officers observed a 17 year old male push another unidentified male. When th  officer attempted to stop the individual’s assaultive behavior, the suspect pushed the officer whereupon he was placed under arrest. The 16 year old host of the party was issued an Alcoholic Beverage Control Law violation for Unlawful Possession of an Alcoholic Beverage, with the intent to consume, by persons under the age of twenty-one years. Both parties appeared to be intoxicated and were ultimately released to the custody of a parent at police headquarters. Several minors were also detained and identified.

Police Commissioner Michael C. Corcoran, Jr. stated that, “this is an ongoing investigation into who may have  supplied the alcoholic beverages as well as the damage to the home.” Rye Police Department will take a zero tolerance approach to under aged drinking and towards the hosting of these types of parties. These behaviors violate the law and are a recipe for disaster.”