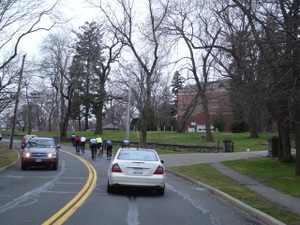 The meeting is in addition to the regular council meeting scheduled for Wednesday.

The $1.7 million capital projects budget is allocated as follows:

Rye City maintains 51.63 miles of roadway. The $1 million in street resurfacing was a need identified in the Rye Pavement Management Study, updated in
October 2014 by a City consultant. It identified an immediate need for an aggressive maintenance program of crack sealing and localized patching to prevent the need for more expensive repairs in the future. It also identified the need to increase Rye's annual spending on street resurfacing to $1.0 million per year and to maintain that level of expenditure for the next decade to maintain the current overall condition of city streets.

A New York State program called "CHIPS" is expected to be the source of $300,000 – $350,000 for the resurfacing program. The remaining $1.4 million for the capital projects is come from the Rye City general fund with the exception of $50K from something called "City Street Surcharge".