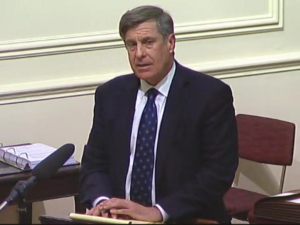 Just 14 months ago, Rye City Attorney Vincent Toomey stepped up to the microphone at City Hall in December of 2015 and on behalf of the Rye City Council boldly lied to all city residents. This deception begs three initial questions:

How did Joe Sack’s administration get away with providing two sets of official city records for its regulated chemical applications in a $2.55 million dollar insurance settlement? How, when faced with a host of dead greens in June 2015, was the Rye Golf Club (RGC) superintendent able to give the golf commission, three city-hired independent experts and the manufacturer of a fungicide containing trace amounts of poison a set of chemical spray charts that clearly show 3 out of 4 applications of the poisoned chemical he made were done in a manner inconsistent with the product’s labeling and in violation of the law, without anyone noticing?

And how, when cops from the New York State Department of Environmental Conservation (NYS DEC) visited RGC six months later – with the very spray charts he gave to the golf commission and the city’s independent experts in hand – did the RGC golf course superintendent then get away with providing the NYS DEC and the Westchester County District Attorney a different set of chemical spray charts, materially altered from the ones he provided to the commission and independent experts?

And why, after the Rye City Review has reported the fact that RGC golf course superintendent, Charles ‘Chip’ Lafferty, plead guilty to the misuse of a restricted pesticide in Rye City Court on April 5, 2016, does Councilman Terry McCartney and Deputy Mayor Julie Killian, still insist to this day on lecturing the public that Mr. Lafferty ‘did nothing wrong’ and that ‘he did everything right’?

By June of 2015 all 20 putting green complexes at the Rye Golf Club were dirt brown and dead. For the entire summer thereafter golf commissioners, city officials and outside turf experts hired by the city focused their attention on the acres of dead grass and Mr. Lafferty’s certified chemical applicator’s records, or spray charts, which must be maintained annually according to law.

The spray charts that Mr. Lafferty provided to the commission and independent experts in June, documented that in April and May of 2015 Mr. Lafferty made 4 applications of a generic fungicide called AmorTech ALT-70 to the course at RCG. This generic fungicide, like the brand name product that had been previously applied at RGC, Bayer’s Chipco Signature, is a registered controlled pesticide under the NYS DEC and the Federal Environmental Protection Agency.

Because of their toxicity, both ALT-70 and Chipco Signature are restricted to either 14 or 21 day application intervals. Application intervals sooner than 14 days are not permitted according to the product labels, which warn: “It is a violation of Federal law to use this product in a manner inconsistent with its labeling.”

The spray records Mr. Lafferty handed over to independent experts and the golf commission in support of a multi-million dollar insurance claim in June detail that he applied ALT-70 at the 14 day rate on April 22nd, May 1st, May 8th and May 15th.  Using simple math, there are eight (8) days between April 22 and May 1st, six (6) days between May 1st and May 8th, and six (6) days between May 8th and May 15th. This appears to indicate 3 violations of the state and federal label law.

Steven McDonald of Turfgrass Disease Solutions, one of the City of Rye’s independent experts, wrote in his June 7, 2015 report that he reviewed Mr. Lafferty’s pesticide records “in-depth” and attested to the fact that Mr. Lafferty’s records reflected 4 applications of ALT 70 “on April 22, 1, 8 and 15 May 2015”.

In August of 2015, Mayor Sack announced that the golf commission chairman had gone through proper channels and contacted City Manager Marcus Serrano and the mayor himself regarding concerns about the ongoing review relating to the toxic greens fiasco. In response, Mayor Sack retained long time Rye labor counsel, Mr. Vincent Toomey, to initiate an official fall 2015 investigation into all the facts and circumstances surrounding the turf decimation.

Three months later, on the evening of December 16th, 2015, Mayor Sack welcomed Mr. Toomey to the podium at city hall to deliver his official investigation findings. Mr. Toomey stated he was pleased to report there was no evidence of any wrongdoing, misconduct or contributory negligence by any city employee. Mr. Toomey went on to praise the strong, exemplary performance by City of Rye personnel. (See video of this testimony here)

Councilman Terry McCartney repeated these findings of no misconduct,  praised Mr. Lafferty, and that same night  announced a settlement that he had personally negotiated, as assisted by other council members and city staff, of $2.55 million from TKI, the distributor of ALT-70. Applause rang out throughout the council chamber. The applause came again as the council voted 7 – 0 to approve the settlement and accept the $2.55 million payment from TKI’s insurance company, AIG. (See video of this official action here)

There would however be no city council fan-fare 6 short days later, on December 22nd, when an officer from the NYS DEC came to visit Mr. Lafferty at RGC with a copy his spray records in hand – records that were destined to be reviewed by the District Attorney and a Court of Law.

There was no applause or smiles to fill the room when Mr. Lafferty, under questioning by police, admitted privately what he has refused to admit to every member of RGC and member of our community to this day – that Mr. Lafferty knowingly and purposefully applied the product that killed the greens at RGC in a manner inconsistent with the law.

“Chip admitted that he applied the Alt 70 on May 1st in a manner not in accordance with the product label.”

The Cover-up is Worse than the Crime

How do tangible spray records that were presented as evidence of an employee’s actions in a multi-million dollar insurance claim – which were vetted and attested to by industry experts – suddenly change? We’ll leave that issue for Part II of our series.

The Journal News, independently investigated and reported that Mr. Lafferty misapplied the green-dyed product, ALT-70, to hide dying grass before a golf tournament. The Journal News report was then immediately attacked on video by Deputy Mayor Julie Killian (who then accepted a campaign donation from Mr. Toomey for her recent unsuccessful NYS Senate bid) and Councilman McCartney, who continued to repeat the city’s official $2.55 million insurance claim settlement talking point that Mr. Lafferty did everything right. (As if purposefully misapplying pesticides, having two different sets of spray charts (one altered) and then pleading guilty to environmental violations in court is right.)

How ironic that the Sack Administration’s full-throated public proclamations that Chip Lafferty did nothing wrong has once and for all been debunked by none other than Chip Lafferty himself. The following is a full excerpt from the investigating DEC officer’s report and interview of Mr. Lafferty, which again, have been obtained through FOIL requests.

The records that Mr. Lafferty showed me indicated the he next applied ALT 70 at the full rate on May 15th, 2015. This contradicts the records supplied to me by the complainant. The complainant’s records indicate an application of ALT 70 was conducted at the full rate on May 8th. The hard copy notes Mr. Lafferty showed me were in a three ring binder. The notes were not in chronological order. The spray charts were stapled together by each individual day for all of his application records except for May 1st and May 8th. Those charts were stapled together.” 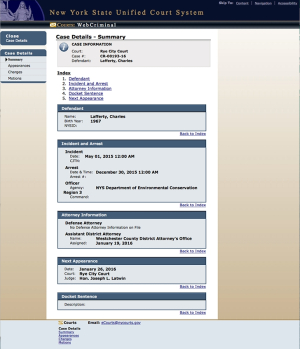 Eight days after this interview – on December 30th 2015 – the DEC investigating officer returned to meet with Mr. Lafferty again. This time the officer charged Mr. Lafferty with a violation of environmental law and arrested him.

SOURCE DOCUMENTS USED IN THIS COLUMN:

Next Up in Our Series – Part II – What city officials knew; when they knew it, and Rye City Corporation Counsel Kristen Wilson’s unbelievable role and new low in this fiasco.