Your Tax Contribution To Rye Builder Wealth Is Appreciated! Commentary by Ted Carroll. 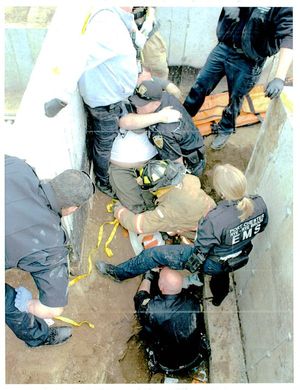 Welcome back everyone. Let’s begin our new 2017 season of Rye Municipal Corruption columns here by restating our simple core thesis – which is that an elected official looking the other way from wrongdoing is participating in wrongdoing. Silence in the face of unethical favoritism speaks at thunderous volume. Dismissing evidence of municipal corruption is in itself corrupt. These truths are held to be self-evident even if someone wants to tell you they are not.

For this column, we’d like you to take a look at the Rye City tax bill you just received this week. Go ahead and get it and note the percentage increase you’ll be paying over the 2016 rate. It’s 6.73%. Regrettably it’s almost certainly driven by corruption because ALL city council members voted for it last December while purposely staying silent and looking away from the underlying reason – which is years of recurring decreases in our city’s 2nd largest revenue line – Building Department Licenses & Permits. How much money are we talking about?  Here are the respective line item revenues tracked by year:

And how much was the financial gap over the tax cap that this 6.73% increase was needed for?  $1,097,184 – indicating 80% of the funding that forced this tax increase could have been avoided if we had only stayed flat with our 2014 building permit revenue levels. Worse yet, prior to 2014 our average annual increase for building permits revenues was 23%. Using this actual annual prior increase percentage, our treasury would have had an extra $562,000 for 2015 permits, an extra $692,000 for 2016 and an extra $851,000 for 2017. There is certainly no certainty that this entire extra $2,100,000 could have been raised. It could have been more or it could have been less. But what is certain is that no one at Rye City Hall has been authorized to find out about these material missing sums despite publicly crowing in the narrative of their own 2017 budget book that the local building industry is on a tear.

Builders Know – No One Is Checking – And They Know Why.

It wasn’t always this way in Rye. In fact, this unexplained disconnect between tangibly expanding local construction activity and substantial municipal building revenue shortfalls is a phenomenon distinctly associated with a new era. That era began with the November 2013 election of Mayor Joe Sack and his GOP sponsored ‘Rye United’ running mates Julie Killian, Terry McCartney and Kristin Bucci. Add in Republican Richard Mecca, first appointed to then elected to the council in 2015, and city council majority during this era of disconnect is stacked 5 to 2 on the council bench by the local GOP. Why would these officials be resistant to a full and fair accounting of municipal permit revenues in the face of such a gross declining indicator of real trouble?

Friends of Cameron & Punyon’s Democrats collected $29,224 from 72 individual donations. There are $0 readily identifiable donations to the Democrats from building & construction interests. Rye United’s Republicans collected $62,994 from 160 individual donations. $19,250 or 31% of this amount was received from 26 donors related to local building & construction interests.

Friends of Emily, Danielle and Jeff’s Democrats collected $36,392 from 119 individual donations. There are again $0 readily identifiable donations to the Democrats from building & construction interests. True To Rye’s Republicans collected $17,305 from 24 individual donations. $14,500 or 84% of this amount was received from 9 donors related to the local building & construction industry. Worse yet, substantially all of these amounts were reported as being received THE DAY AFTER the final public reporting “cut-off date” prior to the election so local media was kept in the dark about where this money was actually coming from. Included in their total of $17,305 but not the $14,500 from builder & developer interests is $1,000 from candidate Richard Mecca, a building electrical inspector in White Plains.

A Fabulous Return on Investment – Unopposed

As a private equity fund manager in my day job I well know the power of leverage in both financial structuring and in investment negotiations. Imagine finding a legal way for a local industry to leverage a total ‘political investment’ of just $33,750 ($19,250+$14,500) into an apparent off-the-charts tangible profit of between $880,000 and $2,100,000. Well you might want to consider this but you can’t because it’s illegal – except perhaps in Rye NY – and for the time being.

What’s more distressing about all this is the silence by Rye City Council Democrats Emily Hurd and Danielle Tagger-Epstein about this ongoing financial subterfuge. And for that we in the good government movement probably have only ourselves to blame.

Last year you see we researched, documented and publicized the case of a prolific local Democratic Party donor family, exceptionally lucky over the years in matters of permits, permissions and shockingly low real estate assessments issued selectively by Rye City Hall. Their donations in just the past several years are indicated to be $26,850, with $20,000 alone given to the area’s most powerful elected Democratic Party official, who also is a former Rye City Councilman. I’ve recently had a Rye City councilwoman literally throw up her hands and say “Please do not mention their name to me!” In all fairness to her, the evidence of apparent fraud against the Rye building department we’ve presented is so overwhelming that it tends to dramatically raise the blood pressure.

So folks, that’s how we got our new unnecessary 6.73% city tax increase. And it’s shameful and almost certainly based on improperly lowered building costs reported on unverified liar affidavits at its core. The city comptroller’s office could check these affidavits if someone would let them. But so far, they have no authority to do so. Local party bosses Tony Piscionere and Meg Cameron should take a bow.

The Biggest Losers from Gambling at Rye Golf? Rye Taxpayers & the Truth.