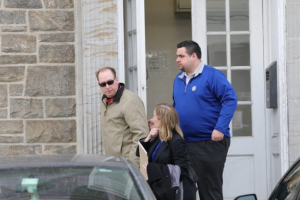 The Rye Golf Club golf course superintendent, Charles ‘Chip’ Lafferty is required by law to maintain and submit chemical application records to the NYS DEC on an annual basis. The set of official chemical application records Mr. Lafferty kept and provided to the Golf Commission, City Council, City Attorney and the outside turf experts retained by the city to determine causation of death for all 20 green complexes in 2015 showed Mr. Lafferty made four total applications of ALT-70, three of which were made in conflict with the product’s label– a violation of federal law. [See the Alt 70 label – here.]

Agronomist Steven McDonald of Turfgrass Solutions, LLC on June 7, 2015 recited each application of ALT-70 documented in said chemical spray chart Mr. Lafferty provided to city officials on the front page, third paragraph of his report as follows – “Then ALT 70 was applied on April 22, 1, 8 and 15 May 2015 at 4.6 oz per 1000 sq ft.”

It should be noted that although Mr. McDonald reviewed and confirmed Mr. Lafferty’s four sequential ALT-70 applications, he apparently failed to alert the City of Rye that these applications we in violation of the law, even though he was paid over $8,000 by the city to investigate such things. A copy of this original spray chart Mr. McDonald reviewed above is – here.

After Mr. Lafferty’s arrest by the NYS DEC on December 30, 2015 he provided copies of his official chemical application ‘spray charts’ directly to the Rye City Court and the Westchester County District Attorney. These charts, however, indicated that Mr Lafferty applied AmorTech’s ALT-70 on only three occasions, on April 22, May 1st and May 15th 2015, and that only one application was in violation of the law.  A very different accounting of his actions than the first set of spray records Mr. Lafferty provided months earlier to city officials. (See arresting officer’s notes on pages 4 – 5 of the complaint – here.)

A copy of this modified spray chart, provided by the city to the NYS DEC and the Office of the Westchester County District Attorney is – here.

All of which begs the question, how does the City of Rye have two different sets of records for the killing of the greens at RGC?

Do golfers keep two sets of scorecards in their pockets? Do they submit one scorecard after a round is over and then another, altered and different scorecard when the first one is called into question?

At his April 5th 2016 court appearance, with his altered and improved spray records in hand, Mr. Lafferty plead guilty to a single violation regarding the misuse of a restricted pesticide and paid a $500 fine. The existence of two sets of different spray charts, one which was provided to city officials, manufacturers, distributors and insurance entities for the no-fault insurance claim and a second set which were provided to the court in Mr. Lafferty’s defense has been a closely kept city secret, until now. What has been no secret however have been the waves of official city praise for the heroic actions of Mr. Lafferty:

Rye Attorney Vincent Toomey, Video December 16, 2015: There has been “no misconduct, no wrongdoing” nor any “contributory negligence” by any city employee in this matter – “the city retained experts came to same conclusion which is this was a tragic situation but not one that any personnel within the City of Rye were responsible for.”

Rye City Councilwoman (& Rye Golf Commission Member) Kristin Bucci, Video December 16, 2015: “From the beginning our golf club manager (Jim Buonaiuto), our corporation counsel (Kristen Wilson) and (Councilman McCartney) did every single solitary thing right – in terms of documenting the claim and figuring out what the issues were and laying things out. And it was an untold number of hours that specifically (Councilman McCartney) put in. And, you know, it worked out very well and I, I also support it but, thanks (Councilman McCartney).”

Rye City Councilman (& Rye Golf Commission Member) Terry McCartney – who personally led negotiations with the attorneys for the distributor of TKI’s ArmorTech ALT-70, Video December 16, 2015: I have “spent more time on this issue than any other – (groundskeeper Charles “Chip” Lafferty) mainly, then (Club Manager Jim Buonaiuto) then everybody else, did everything right here -22 other courses had this problem but we got back faster based on things (Mr. Lafferty) did. It goes way beyond if (Mr. Lafferty) did anything wrong. He did everything right. (Mr. Lafferty) is the reason our course is back. (Mr. Lafferty) deserves a lot of credit that we had any season at all”

So where did this new set of official spray records come from?

City Labor Attorney Vincent Toomey had spent months sifting through all the city files before making his findings of no misconduct or contributory negligence known publicly at the December 16th public meeting. Along with Mr. Toomey the city was blessed by an abundance of highly trained volunteer legal talent, all focused on this matter. Rye Councilman Terry McCartney, former Rye Councilman Richard Slack, former Rye Deputy Mayor Laura Brett and current Rye Mayor Joe Sack are all attorneys and Members of the NYS Bar. All of these experienced legal professionals were involved in the matter in addition to Rye’s lead attorney, Rye City Corporation Counsel Kristen Wilson, who received much public praise and applause for her diligent efforts.

Yet at some point Ms. Wilson added a new client to her private law practice. This client is unique, and one she did not publicly disclose until after news of NYS DEC Officer Jackson visited the Rye Golf Club on December 24th and 30th of 2015. The Rye City Review broke the news about this new client on April 8th of 2016 in this way:

“City Attorney Kristen Wilson represented Lafferty during his multiple appearances in Rye City Court, and told the Review that she was representing Lafferty in her private capacity as a lawyer and not on behalf of the city. Wilson also declined to comment on the case when reached by phone on Wednesday, April 6.

By late June of 2015, written evidence of illegal misapplication of a controlled pesticide is apparent to anyone involved with the investigative team, which included not one, or two, but three independent turf experts. That team was assisted by four attorney volunteers, including Rye’s then Deputy Mayor Laura Brett and Rye Mayor Joe Sack. Rye Councilman Terry McCartney voluntarily heads up confidential negotiations with ALT-70’s distributor, TKI, and its insurer, AIG. Mr. McCartney is a product liability specialist by background. Mr. McCartney is also Mr. Lafferty’s strongest public advocate seconded only by Rye Councilwoman Bucci and Rye’s Outside Labor Counsel Vincent Toomey.

Meanwhile, Rye’s lead attorney, its official Corporation Counsel, and her new special client, Mr. Lafferty, will soon represent two very different versions of official city records in front of two very different audiences – one which results in a $2.55 million dollar payment to the city from AIG, and the other which results in a guilty plea to a single violation of NYS and EPA environmental law. One of these records must be false as two sets of records documenting chemical application for the same time period cannot be both materially different and accurate simultaneously.

We know by the mere existence of two sets of records, that the second set of records provided by Ms. Wilson and Mr. Lafferty to the court were altered from the first set of records given to city officials in regard to the $2.55 insurance claim.  But the $64,000 – or $2.55 million question is – did the City of Rye make TKI and AIG aware of Mr. Lafferty’s now admitted violation of improperly applying a registered pesticide (that killed the greens) before they sent the city $2.55 million as a settlement?

We suspect the answer to this is that they have not because as recently as August 3rd 2016 – after The Journal News published the findings of their own investigation of toxic chemical misuse – both Councilman McCartney and Rye’s new Deputy Mayor Julie Killian were publicly reassuring club members and Rye residents that Mr. Lafferty did everything right and that ALT-70’s product contamination was the sole reason for the death of a 20 green complex’s last summer (Video – starting at about time code 12:20).

Hmmm… what motive might Mayor Sack and the City of Rye have to cover up the improper application of the pesticide that killed the greens at RGC by a senior city employee in a $2.55 no-fault insurance settlement?

Here’s perhaps a clue – as The Rye Record reported last summer, lets recall that Mr. McCartney repeatedly publicly warned upset club members “the more we talk about what we did right or wrong the more damaging it could be it could to a settlement."