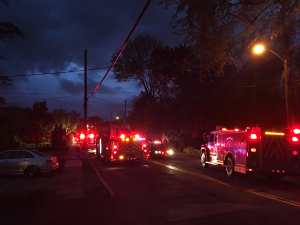 (PHOTO: Police, fire and ambulance on scene on the Rye Harrison boarder at Park Avenue.)

Rye and Harrison police responded to calls of a body in Beaver Swamp Brook Saturday evening around 8pm.

There were unconfirmed reports of a woman, in her 50s, dead in the water in Beaver Swamp Brook. Park Avenue at the Rye Harrison border remains blocked late Saturday evening.

The scene and related investigation is being run by Harrison PD.

(This story was updated at 2:45pm) Rye PD arrested a suspect on Sunday with an active warrant. The arrest took place after a foot pursuit...
Read more
Police & Fire

The emergency call came in at 1:36pm Thursday ... Ducklings were stuck in two different storm drains at 296 Purchase Street at the corner of...
Read more