For the second time in ten days the Rye PD has busted boozing under age drinkers – and then made a point of issuing PR about its crackdown.

This time, Rye PD "names names" in its PR release, reporting the home owners' son, 18 year old James Chabot, was charged with a NY State ABC violation, 65-C, for Possession of Alcohol under 21 with intent to consume.

The homeowners are John A Chabot and Laurie B Chabot. The police communication also makes reference of the female head of household.

There is an ongoing Rye PD investigation. Public Safety Commissioner Michael C. Corcoran, Jr. stated that, “this is the second under aged party that we responded to in a week. This is a continuing investigation which will include interviews with the parents of the juveniles and others who were in attendance.”

The last busted booze bash was at 6 Barberry Lane. 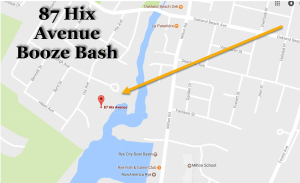 On Friday, May 5, 2017, at approximately 10:30 p.m., City of Rye police officers were dispatched to the Hix Park area on a reported noise complaint. Upon arrival, officers heard loud music and yelling coming from 87 Hix Avenue along with multiple individuals running through backyards from the rear of the residence. Officers walked to the side of the house and observed approximately 15-20 youths drinking beer and playing beer pong, along with several red solo cups and many empty beer cans.

Officers located James Chabot, age 18, who identified himself as the homeowner’s son. Chabot claimed that his mother was in the house asleep. After a few minutes, the homeowner came to the front door and denied any knowledge of the events taking place in her home and advised the officers that she arrived home only 20-30 minutes prior to police arrival.

Officers confirmed her story and ultimately issued James Chabot, a NY State ABC violation, 65-C, for Possession of Alcohol under 21 with intent to consume.

Public Safety Commissioner Michael C. Corcoran, Jr. stated that, “this is the second under aged party that we responded to in a week. This is a continuing investigation which will include interviews with the parents of the juveniles and others who were in attendance.”

Corcoran cautioned parents to be aware of any type of gathering of young people at their home, to monitor all parties closely and obviously forbid drinking alcohol by minors. “With under aged drinking, things can spiral out of control quickly. These types of parties violate the law, endanger our young people and potentially expose homeowners to civil and criminal liability, said Corcoran.”

“I encourage the public to immediately contact the Rye Police Department to report instances of this nature, said Corcoran.”