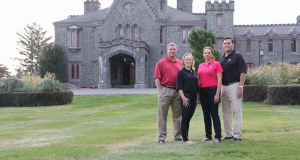 (PHOTO: Rye United on guard at The Castle)

“Chip Lafferty goes out of his way, not to use chemicals that don’t need to be used.”…”We get awards every year at Rye Golf for being environmentally friendly.” – Rye City Councilman Terry McCarthy from the dais on August 3, 2016 in response to Gannett’s Journal News investigation into pesticide use that featured Rye Golf Club’s greens keeper Mr. Lafferty guilty plea in misusing the registered pesticide that killed the greens the previous spring at Rye Golf Club.

Since we last left you, we’ve learned from AIG Insurance executives that the company has begun an investigation into the $2.55 million settlement that the City of Rye negotiated with the manufacturer of the allegedly tainted pesticide that killed 20 green’s complexes at RGC in 2015.

We believe the investigation has been launched in part due to the information released publicly regarding Mr. Lafferty’s pesticide applications in 2015 – which contradicts the public narrative that has been spun relentlessly by the city.  To recap, City of Rye attorney’s and council members have testified in public that all of Mr. Lafferty’s chemical applications were done properly in accordance with the law. Of course since then Mr. Lafferty was forced to actually plead guilty in court of law for the misuse of a pesticide that the city claimed was the sole cause of the destruction of all the Rye Golf Club greens in 2015. After which the city then kept up its official lie, please refer to the opening quote in this article again.

Since Mr. Lafferty’s guilty plea in April of 2016, two sets of conflicting ‘official’ pesticide spray records for Mr. Lafferty’s 2015 applications leading up to the death of the green’s have emerged. The first set was given to city officials, independent experts and attorneys by Mr. Lafferty and in turn provided to the manufacturer, its insurance consultants – and most likely to AIG – as part of the city’s original $6 million insurance claim.  For the conspiracy theorists out there it is worth noting that even though three city experts and multiple distributor, manufacturer and insurance consulting experts reviewed these spray charts, not a single one reported that the applications of Alt-70 were made by Mr Lafferty at improperly short day intervals contrary to the EPA label’s 14 day minimum interval required by law.

The second set of 2015 spray records were provided by Mr. Lafferty after the NYS DEC police showed up and questioned him about his first set of records, with those original records in hand. At that point, Mr. Lafferty gave the police that different set of records than he gave city officials, independent investigators and agents of the insurance company. Mr. Lafferty’s new and improved records showed only a single illegal application of Alt-70 in 2015 (See Series Part 1). And believe it or not, at that point, as his personal defense attorney Mr. Lafferty hired – or was represented for free by – none other than City of Rye Corporation Counsel Kristen Wilson! (See Series Part 2) And thus Mr. Lafferty went marching down arm and arm with the city’s own attorney to the Rye City Court with a different set records in hand than the city provided to the product manufacturer and insurance company, and proceeded to plead guilty to the misuse – over-application to be specific – of the same product that killed all the greens at Rye Golf Club.

But mind-blowingly the city had only just received the $2.55 million dollars in insurance settlement funds from AIG based on the fact that Mr. Lafferty did ‘nothing wrong and did everything right’ – when in reality; city officials, city attorney’s and city council members had received secret expert scientific field test evidence in late July of 2015 that informed them (not residents or club members or anyone else) that no damage was observed in tests where the contaminated Alt-70 product was applied to living turf at the legal 14-day rates (See Series Part 3)

Only in Mayor Joe Sack’s and Rye United’s City of Rye NY, folks.

Coming Next – What’s Past is Prologue?

Flush with AIG insurance settlement funds, the city council and the club have moved to put this whole ugly incident behind them. They have embarked on numerous changes to the course to heighten the ‘member’s experience’ at the club. These include brand new large practice greens and the removal of a lot of trees and more. In a way it’s a good thing the city does not look back. If they did and went too far they might recall 7 greens having to be shut down after Labor Day at Rye Golf during the 2005 season under Scott Yandrasevich’s management and Mr. Lafferty’s supervision. And this was after Mr. Lafferty had greens trouble and lost his position at the nearby prestigious Wykagyl Country Club in 2002 (see attached article). That, by any measure, appears to be a lot of troubled greens.

But looking back sometimes is not a bad thing. While AIG is now looking back at what exactly happened at Rye Golf Club in 2015 we decided to look a little further back to 2014 to see if there might be a recorded pattern of apparent misuse when it comes to Mr. Lafferty’s handling of registered pesticide’s on behalf of the taxpayers of Rye – and with the active ingredient found in Alt-70 specifically.

And that will be the subject of our next installment of this series, ‘2014: A Pattern of Serial City of Rye Pesticide Abuse?

If I were AIG, I’d sure like to know.