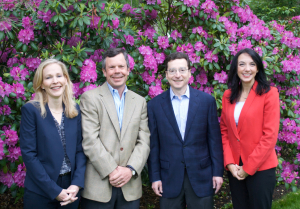 Looks like the current council will have some competition this fall. Here is the PR as issued by the candidates and Rye City Democratic Party Chairwoman Meg Cameron. Cameron herself mounted an unsuccessful race in 2013.

Two Democrats and two independents announced that they would run together as a ticket for Mayor and City Council, saying they are running in order to make the City Council do a better job of listening and responding to the concerns of residents.

Josh Cohn leads the ticket as candidate for Mayor. Sara Goddard, Julie Souza and Ben Stacks will round out the ticket as City Council candidates. Each has significant experience serving the Rye community through volunteerism on Rye City committees, local not-for-profits, and residents’ groups. Goddard and Souza are Democrats; Cohn and Stacks are independents. The ticket will run on the Democratic line and will also seek third-party endorsements.

In a joint statement, the candidates said, “Our goal is a City Council that responds to residents’ concerns and welcomes public participation. We are running because you deserve to be heard.”

Rye City Democratic Party Chairwoman Meg Cameron said, “Rye residents are lucky to have such highly-qualified people willing to serve in our local government. They would bring to the Council expertise in law, finance and business. They have demonstrated their care for our community through their volunteerism. Perhaps most important, they are committed to restoring a respectful, resident-friendly local government.”

MAYOR –  Josh Cohn recently retired from partnership at Mayer Brown, a leading global law firm. He headed Mayer Brown’s US derivatives practice, co-headed its global derivatives practice, and has been listed for years in Chambers, Best Lawyers in America and other top-lawyer lists.   After retiring, Josh plunged into local activities, acting as a leader on behalf of 1,100 petitioners concerned that wireless equipment installed next to their homes would lower property values and harm neighborhood character. He helped form the community group Protect Residential Rye to safeguard Rye's quality of life and environment. He is also participating in meetings of the City of Rye Human Rights Commission. Josh is a former – and perhaps future – cyclist and runner, and has enjoyed participating in local events such as the Rye Turkey Trot and the Y’s Derby Fun-run. He has been a member of Rye Golf Club and is a supporter of the Rye Free Reading Room, a Rye Y member, and a 25-year member of Community Synagogue of Rye.  He lives on Green Avenue and has a daughter, Hannah, who attended Milton School. His mother lives in the Osborn. B.A., Columbia College; J.D., NYU School of Law.

COUNCIL MEMBER - Sara Goddard. After working in the fields of energy and structured finance, Sara raised her children and volunteered her time and skills to benefit the Rye community full-time, emerging as a leader in conservation and environmental protection. She founded and chairs the Rye Sustainability Committee, which produced the Rye Sustainability Plan and won national recognition from the EPA. She is a founding board member of Sustainable Westchester and has served on the executive committees or boards of numerous non-profits and civic organizations, including the Rye Conservation Commission Advisory Council, Rye Nature Center, Federated Conservationists of Westchester County, NY Rising, Twig, and Rye Garden Club. She and her husband Taegan Goddard, founder of Political Wire, live on Island Drive and have three sons.  They are members of Shenorock and Apawamis clubs. A.B. Mount Holyoke; MBA Yale School of Management.

COUNCIL MEMBER - Julie Souza has a career in sports media and has worked for CBS Sports, Sports Illustrated and ESPN. Currently, she is Senior Vice President, Business Development & Strategy for a sports technology company, Second Spectrum. She and her husband, John, live on Mistletoe Lane. Their three children attend Midland School. She is an enthusiastic hockey/baseball/softball/soccer/lacrosse mom and an avid sports fan. She serves on the Board of Directors of Carver Center, is President of the Loudon Woods Neighborhood Association, and volunteers with Midland Elementary School, POTS, and the Children's Philanthropy committee of the Rye Women's Club. Julie and her family are members of Resurrection Church and Rye Golf Club. B.A. University of Michigan; MBA Harvard Business School.